Remember Ban Hin Lee Bank? Or Southern Bank? What about Bank Bumiputra Malaysia? All these banks have one thing in common. Through multiple mergers and acquisitions, all these banks are now part of the CIMB Group Holdings Bhd (KLSE:CIMB) ([stock_quote symbol=”KLSE:CIMB” show=”name” nolink=”1″ class=”1″]).

CIM Group is today the 2nd largest bank in Malaysia. It has an asset and deposit size of RM486 billion and RM339 billion respectively. It has a market capitalisation of RM59.8 billion as of June 2017. Malayan Banking Berhad (KLSE:MAYBANK) ([stock_quote symbol=”KLSE:MAYBANK” show=”name” nolink=”1″ class=”1″]) is its largest competitor at the moment.

CIMB Group Holdings is listed on Bursa Malaysia since 2003 and is now offering a 3% dividend yield for investors.

However, the questions in investors’ mind now might be:

Let us investigate that with the key things you need to know about CIMB Group Holdings Bhd.

Apart from its key markets in ASEAN, it is also operating in Greater China, the USA, the UK, India, Sri Lanka, Taiwan and South Korea.

At the moment, the top 4 markets for CIMB Group by its profit before tax in 2016 are:

In 2016, the company generated RM16.1 billion in revenue and RM3.65 billion in net profit. It produced a return on equity of 8.3%. The company also paid out 49.5% of its profit as dividend during the year.

CIMB Group classifies its business into 5 main segments: The profit before tax contribution in 2016 by each segment is as follows:

Consumer banking is its retail business which provides financial products for the public. This includes products such as

Some of the profit generators for its consumer banking segments are its mortgage loans, auto loans and credit cards.

This segment generated an operating income of about RM2.04 billion in 2016.

CIMB Group Holdings Bhd has been positioning itself as the “ASEAN Bank”. It has focused on building up its presence in the region, mainly through merger and acquisition. For example, the group acquired Bank Niaga in 2002 and merged it with Lippo Bank in 2008 to form CIMB Niaga. It is now one of the largest lenders in Indonesia.

Similarly, in Thailand, CIMB Group bought a controlling stake in BankThai in 2009. At that time, BankThai is already one of the top ten banks in Thailand.

Today, the company is already in 9 out of the 10 countries in ASEAN and has a target to reach all 10 countries in the next few years. This could give CIMB Group a strong advantage to provide services to companies who are looking to expand in the ASEAN region as well.

Moreover, the ASEAN Economic Community (AEC) could bring this region closer together. And if the region is able to form a more integrated economy together, the potential for more trades and commerce are huge. And as one of the largest financial institution here in ASEAN, CIMB Group is very well-positioned to participate in this growth and help businesses around ASEAN to do more business with one another.

From the hundreds of Annual reports that I read a year, CIMB Group Holdings has one of the best annual reports in the financial industry. It provides good details on the development of the business and the outlook for the future. It also publicly states the company’s targets for its shareholders to see. 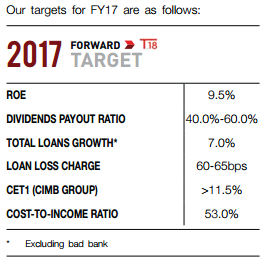 All these means CIMB Group Holdings tries to operate at a very transparent level. This is a good sign for shareholders and they can get a candid and direct feedback from the management.

As such a big organization, there are many risks and threats that are awaiting CIMB Group Holdings Bhd. One such threat is the rise of FinTech, or Financial Technology firms. We have seen how technology has disrupted traditional businesses such as retailing (Alibaba), transportation (Grab | Didi Chuxing) and even telecommunication (WeChat and Whatsapp).

Technology has the ability to lower the playing field and allow small players to compete directly with industry leaders. In recent years, there have been huge amount of investments going into FinTech, enabling many of them to produce new products and solution that were traditionally offered only through the banks. It is still unclear how the new technology might disrupt the banking business, but it is important for investors to keep an eye on the development of this fast-growing industry.

Although CIMB Group has the plan to start its own FinTech division, it is still unclear if the company has the ability to disrupt its own business model that has proven to be so profitable over the past few decades.

Lack of Growth Over the Past 6 Years

Although CIMB Group Holdings has been growing its loan books and revenue over the past few years, its operating profit has not really seen a huge growth since 2010. In 2010, the company recorded a revenue of RM11.8 billion and an operating income of RM4.6 billion. Yet in 2016, its revenue stood at RM16.06 billion but operating income is still around RM4.89 billion.

Thus, it raises questions on whether CIMB Group has been focusing too much on growing its revenue instead of its profits.

CIMB Group is current trading at about 16.4 times its earnings and at 1.3 times its book value. The bank also provides an attractive yield now at about 3.0%.

Compared to some of the regional banks’ valuation, it is actually trading at a premium to its peers.

You can read their investor relationship team through this link.