With a market cap of more than half a billion dollar, Breadtalk Group Limited (Breadtalk) is among Asia’s leading food and beverage conglomerates. The company saw its share price doubled in merely 2 years, from S$0.50 per share in 2016 to more than S$1.00 per share in 2018. (This does not include the share split of every 1 ordinary share into 2 ordinary shares in May 2018.)

Despite owning a variety of household brands such as Toast Box, Food Republic and So Ramen, BreadTalk is continuing to expand its empire in the food and beverage industry by the joint venture and strategic partnership. In the first half of 2018, the company has opened a few outlets in Singapore as well as overseas market.

Will BreadTalk continue its growth in the near future? Here are some facts that you should know. BreadTalk’s second-quarter revenue grew 0.8% to S$148.8 million. This was led by the growth in the Food Atrium, Restaurant and the 4orth Food Concepts division. However, the company recorded a decline in revenue for Bakery divisions from S$147.7 million in 2Q17 to S$148.8 million in 2Q18. It was due to lower revenue from directly operated stores and franchise revenue in China.

It is worth noting that its 4orth division reported a 53% y-o-y growth in revenue, from S$2 million in 2Q17 to S$3 million in 2Q18. For your information, 4oth is a newly formed business division in 2017 with a different business model which aims to respond quickly to changing consumers’ preferences. Under this division, the company has successfully rebranded “RamenPlay” to “So” last year. As of 2Q18, the company added another 3 outlets to its portfolio to a total of 8 outlets in this division. Earnings Before Interest Tax Depreciation Amortisation (EBITDA) for 2Q18 declined 1.9%. It was mainly due to the decrease in earnings of a staggering 40% from its Bakery division. BreadTalk has actually closed down a total of 29 outlets under the Bakery division since last year due to poor performance in the mainland China.

EBITDA from restaurant division has declined 2.2% to S$7.1 million from S$7.2 million due to increased in administrative expenses for the opening of Din Tai Fung restaurant in the United Kingdom before the end of this year.

Likewise, the 4oth division is still making losses of S$0.1 million which was attributed to pre-opening expenses of new outlets. However, the management stated that the profit margin for this division has surpassed their expectations so far. On balance sheet wise, BreadTalk has shown an improvement in its cash and cash equivalents from an S$141 million in FY17 to S$207 million in 2Q17.

Current liabilities increased by S$59 million from S$257 million to S$316 million mainly due to the investing activities, repayment of loans and dividends.

Overall, BreadTalk’s has a healthy balance sheet with a net debt of S$51 million to date. 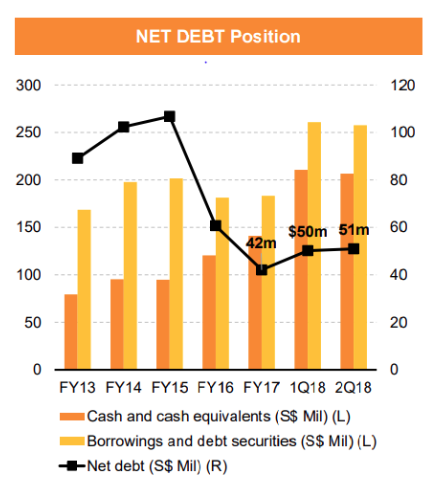 BreadTalk has reported positive figures both in net operating cash flow and free cash flow of S$10 million and S$18 million respectively. Although there has been a decline compared to 2Q17, it is still at a healthy level.

The management has given some comment on the outlook of the business. They will be focusing on leveraging technology to improve their operational efficiency, cost management and expanding their brands into existing and new markets. Likewise, they expect more new brands to be launched in 2019. This might affect their short-term earnings volatility as certain capital and operating expenditures will need to be incurred and invested to realise medium and long-term goals.

As mentioned above, the first Din Tai Fung restaurant will open in the United Kingdom at Covent Garden with a second restaurant at Centre Point by year-end. We will likely to see an improvement in its earnings for Restaurant division in the first quarter of 2019.

At a share price of S$1.04, BreadTalk is trading at a PE of 47 which is steep compared to its peers and slightly overvalued in mine opinion. Let’s take a look at its latest 4 quarters performance at the chart below. Its revenue has been hovering around S$150 million since 3Q17, while EBITDA figures were moving sideways during the same period. As we know, BreadTalk has been putting a lot of effort to expand their presence in the market recently. It would take some time for the company to build a strong foundation for a sustainable growth in the long term. Overall, I am positive on the company’s prospects, just that its earnings will likely to remain flat in the near future before entering the next stage of growth.