Frasers Commercial Trust (FCOT) is a REIT that holds income-producing commercial properties in Singapore, Australia, and the United Kingdom. It is one of the 4 REITs under the Frasers Property group and was listed on the SGX mainboard in 2006. As of 18 Oct, it’s market capitalisation is about $1.26 billion.

Here are six things to note about Frasers Commercial Trust before investing in it.

Frasers Commercial Trust’s assets portfolio comprises 6 properties found in Singapore, Perth, Canberra, Melbourne, and Thames Valley in the UK. Collectively, the assets are worth $2.13 billion, with Singapore contributing the largest portion at 54%, followed by Australia assets that take up 39% and UK asset with 7% of the total portfolio value. FCOT had just released its FY18 results. For the financial year, it saw a drop in gross revenue of 15% to $133 million. Net Property Income decreased 22% to $89.2 million correspondingly. This is mainly attributed to lower occupancy rate at China Square Central (planned vacancies to facilitate asset enhancement), Alexandra Technopark and Central Park. Effect of a weaker Australian Dollar in FY18 also impacted income from Australia properties.

However, Distributable Income to Unitholders increased 5% to $82.7 million due to contribution from Farnborough Business Park and capital returns arising from the disposal of hotel development rights at China Square Central.

Distribution per Unit dropped by 2% to 9.6 cents due to larger unit base arising from the private placement for its UK expansion. Taking a closer look at fourth quarter FY18 earnings, it is worth noting that the important metric of Net Property Income (NPI) decreased 11% to $23.8 million.

This is caused by a lower occupancy for the Singapore properties and Central Park in Perth. China Square Central is undergoing upgrading works with a planned vacancy at its retail podium, while Alexandra Technopark saw a 33% drop in occupancy partly due to upgrading works and departure of Hewlett-Packard as its key tenant.

As for Central Park, it is due to higher amortization of lease incentive and a weaker Australian Dollar.

It seems that Frasers Commercial Trust Q4 FY18 results are not ideal now. Are there any chances of improved performance in the future?

At the moment, the two largest properties under FCOT are undergoing asset enhancements and this could be its growth driver in the near future.

FCOT is constructing a 16-storey Capri by Fraser hotel and refurbishing its commercial space at China Square Central, which is expected to complete by second half of 2019. The new retail podium will be enlarged to 78,000 square feet with better frontage and visibility. The hotel is expected to increase activity and vibrancy that rejuvenates China Square central. 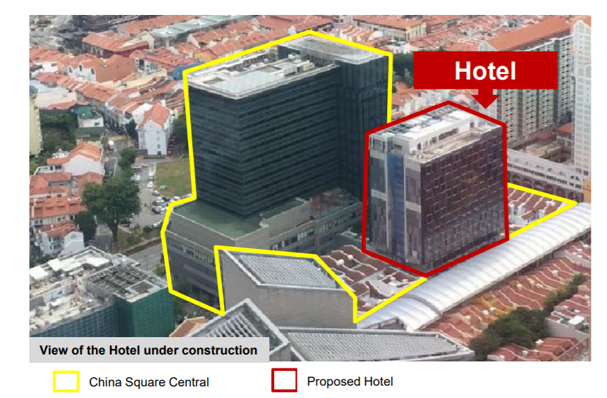 Over at Alexandra Technopark, the asset enhancement and re-branding works are near completion. A new amenity hub that offers wellness, social and lifestyle facilities had been completed in June. The business park will be re-branded a business campus with a more vibrant and engaging environment.

Looking further, Frasers Commercial Trust also stands to benefit from a slew of office, business park and business space assets under its parent Frasers Property worth up to $4 billion, that it could potentially acquire.

Central Park, Perth, constitutes 13% of FCOT asset portfolio value. In FY18, it also contributed about 14.5% of FCOT’s total Net Property Income. However, its occupancy rate has been hovering around 70% in the past year – 71.6%, 68.3%, 69.8% and 70.0% from Q1 to Q4 FY18. In contrast, other Australia assets under FCOT have occupancy of above 95%. Coupled with the weakening Australian Dollar, this could pose a considerable risk for FCOT.

This technically does not just impact FCOT, but all REITs in general. With the Fed raising the Federal Funds Rate thrice so far this year, and one more before the end of 2018, REITs, as a geared instrument is naturally impacted as investors worry about the increasing debt payment. All else equal, REITs share price would drop so that its yield increases to a level high enough to compensate for its investment risks and attract buyers. In fact, REITs sector has fallen considerably recently, as seen from the FTSE ST REIT Index 9% drop so far this year.

Frasers Commercial Trust has maintained its performance in FY18 with a stable distribution to shareholders. However, revenue has decreased due to the lower occupancy for its Alexandra Technopark, China Square Central and Central Park properties.

Fortunately, investors can take heart that the two Singapore assets are expected to see better prospect going forward, with their upgrading works completing next year which would likely attract more footfall and enhance their rental uplift potential.

It pays for investors to monitor closely if FCOT’s asset enhancement initiatives would bear fruits through an increase in revenue and occupancy rate. This would signify that Frasers Commercial Trust has what it takes to continue growing in a rising interest rate environment. Personally, I am hopeful about that.