Since its listing in 2007, the stock has been a multi-bagger for its investors, its share price has grown over 1,100% in value. In this article, we will take a closer look at Dufu’s business profile, management, and financials, to assess whether the company is suitable for an investment now.

Dufu group is made up of seven entities. The listed entity is principally involved in investment holding while the principal activities of its six subsidiaries are as follows:

The group manufactures the following products:

More than 75% of Dufu’s revenue comes from the HDD segment where the group has established long term business relationships with its major customers such as Seagate Technology International (Singapore), Seagate Technology (Thailand) Ltd, Western Digital (M) Sdn Bhd, Western Digital (Thailand) Ltd and MMI Holdings Ltd. In fact, two of its major customers (unnamed) contributed 61.53% and 67.44% of the group’s revenue in 2018 and 2019 respectively.

Dufu derives most of its revenue from abroad, 95% of which is denominated in US dollars (USD) while the bulk of the group’s expenses are paid in the respective local currencies where it operates. Therefore, the gradual strengthening of USD versus the Ringgit is a favourable trend and should give the group a lift in its operating margins.

HDD manufacturers source HDD components from a handful of suppliers only. They are stringent in their selection of component and parts suppliers as quality, reliability and delivery time are crucial in this competitive market. The production volume allocation for the component or part is determined on a quarterly basis. Quality and cost are two primary determinants for an increase in production allocation for a given quarter from its existing qualified suppliers.

The closest competitors to Dufu for the supply of HDD disk spaces and clamps to Seagate and Western Digital are seen as:

To the best of knowledge of its directors, the group estimates that it is one of the top suppliers of HDD disk spacers and has a 20-30% market share globally.

Dufu’s prospects are very much tied to the HDD industry. International Data Corporation (IDC), in its Data Age 2025 report, predicts that worldwide data creation will grow to an enormous 163 zettabytes (ZB) by 2025, which is 10x the amount of data produced in 2017, where hard drives will be central in managing 70% of the data-sphere.

Despite the positive projections in HDD, Dufu acknowledges that it faces significant business and customer concentration risks. The group intends to diversify its product portfolio and penetrate into the automotive segment following its International Automotive Task Force (IATF) 16949:2016 certification on 15 April 2019. While discussions are in progress for its automotive products, this segment is still at a very nascent stage to contribute positively to the group’s top-line growth.

Dufu’s largest shareholder is Mr. Lee Hui-Ta (also known as Li Hui Ta) with a direct and indirect equity stake of 20.67%. Ms. Wang Kuei-Hua is Mr. Lee Hui-Ta’s spouse. Mr. Lee Hui-Ta is the Executive Chairman and Co-founder of the group and has more than 28 years of experience in precision tooling and precision machining.

Key senior management personnel include Mr. Wu Mao-Yuan who serves as Executive Director since 2015. Mr. Wu is also the Managing Director of Guangzhou Futron Technology Co. Ltd, a subsidiary of the group. He owns an equity stake of 3.42% in Dufu.

Separately, Mr. Yeoh Beng Hooi is the Chief Executive Officer (CEO) since 2015, after serving as Chief Operating Officer (COO) since 2004. He has a 0.02% equity stake in the group.

Dufu’s current and cash ratios are at healthy levels. The group also does not have gearing issues as it is in a net cash position. As at 31 December 2019, Dufu has cash and cash equivalents of RM43.5 million versus total borrowings of RM17.5 million.

Dufu’s operations were affected in Q1-Q2 2020 as its plants in China and Malaysia were temporarily shut down due to the preventive measures towards the Covid-19 pandemic. Both plants have subsequently recovered back to full workforce but the group remains cautious of potential supply chain disruption risks since the scale and length of the pandemic remains unresolved.

Over the long term, Dufu’s growth is underpinned by higher demand for storage solutions given the huge growth in data consumption as well as technological advancements in increasing the number of components within an HDD platform. Investors with knowledge and expertise in this area could find Dufu of interest. 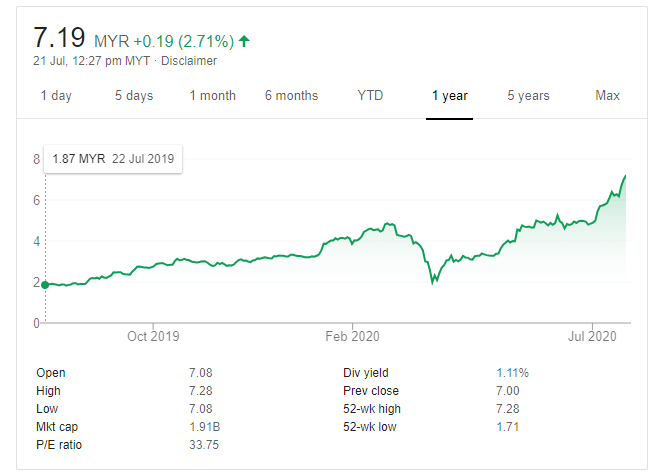