Editor note: This article was updated with recent data but it was written in Nov 2015

Listed on Bursa Malaysia and one of the largest constituents of the KLCI, Tenaga Nasional Berhad is Malaysia’s incumbent power company in Malaysia. It provides the services of generating (53% market share in Malaysia, 60% in Peninsular Malaysia), transmitting (100%) and distributing (100%) electricity. Over the years, Tenaga has been performing a public service which at times compromises its bottom-line. However, investors have been more excited about its prospect recently due to the implementation of the imbalance cost pass through (ICPT) mechanism. As a result, this will allows the company to pass on changes in fuel prices to end consumers. We have seen the ICPT mechanism function in a low fuel price environment but we have yet to witness its success in a high fuel price environment, which is subject to the Cabinet’s approval. Should that happen not only would Tenaga’s earnings growth be more stable but it could also be a re-rating factor as well. Also, the stock has recently sold down the stock due to announcements about its acquisition of 1MDB’s assets. This creates fear that TNB is overpaying for the assets. Currently trading at 11x forward PE (its ten-year low), Tenaga is worth a closer look. 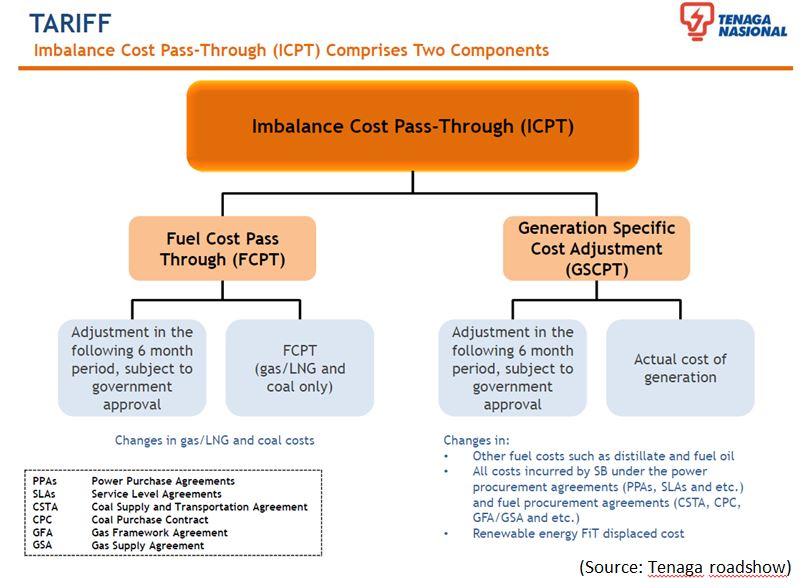 Let’s shed some light on how the ICPT works. Firstly, a base electricity tariff is derived based on this formula:

Tenaga’s working average cost of capital (WACC) is also the desired internal rate of return (IRR) in investing in power assets. It is set at 7.5%. The regulated asset base is basically the cost of assets that transmit and distribute electricity approximately in the size of RM45b. In other words, Tenaga needs to have a rate of return on investing in its assets which are better than returns it could have gotten from investing in the capital markets (WACC is the forgone return).

All these are forecasted and summed up to calculate the base tariff. However, if the forecasts are higher/lower than the actual generation costs, then the ICPT mechanism takes place and fuel price changes are passed on to consumers every six months.
However again, we have not seen the ICPT function in an environment of rising fuel prices. Therefore, we should keep track of the fuel prices its generation mix, which is largely made of Gas, LNG and Coal.

Currently, TNB purchases coal from a variety of countries and procures gas locally from Petronas, specifically the Malacca regasification terminal.

In terms of profits, TNB’s business is seeing signs of a structural improvement. Its pre-tax ROIC is within the 10- 11% range in FY14-15F, vs <8% for 2010 and prior years, according to Credit Suisse. The big driver for this has been the 15% one-off increase in tariffs on 1 January 2014 (i.e. base tariff set as part of the IBR introduction). Secondly, the preservation of the regulated return via the ICPT adjustments and IPP savings utilisation since then. Moving forward, the earnings profile could improve further should the ICPT be successful with the strong political will from the Cabinet. This is necessary as passing on higher fuel costs to consumers might be politically damaging.

Since the utility business is a form of public service, it is crucial to understand some of the political drivers behind the industry. Back in 1992, a massive blackout had the then Prime Minister Mahathir Mohamad dissolve’s Tenaga’s monopoly in the generation business (not transmission and distribution). At that time, it was done by introducing independent power producers (IPPs) into the industry. It is rumoured that these IPP were politically-connected. Therefore, they were guaranteed highly profitable contracts by the government. But this is at the expense of Tenaga having to pay a premium for the electricity generated by them (being the sole transmitter and distributor of electricity). However, due to recent developments such as PPA renegotiations, base-tariff revision in 2014 and the ICPT mechanism, the share price has run-up by a fair bit since 2013.

To recap, Tenaga’s margins had been susceptible to fluctuating input prices, mainly coal, LNG and natural gas. As pre-ICPT, Tenaga has not been allowed by the Cabinet to pass on the higher costs to users. However, with the ICPT, Tenaga has been allowed to do so. Thus, this could lead to better earnings visibility in the long run. To date, the ICPT has been implemented and rebates have been given to users due to the lower fuel prices.

However, one might question if Tenaga would pass on the higher fuel costs to consumers should fuel prices increase. Yet, if TNB is successful in doing that, it would allow us to conclude that Tenaga has more autonomy than we think. Note that we are now in a low fuel prices environment hence the ICPT mechanism works in the favour of politics (lower tariffs). Nonetheless, the reverse (higher tariffs due to higher fuel prices) could be politically damaging. Therefore, any positive indication of Tenaga’s increased autonomy and the conclusive success of the ICPT mechanism would not only allow Tenaga to have more stable earnings. It could also give a valuation re-rating as investor confidence piles in. To investors, this might allow a significant upside to the share price.

In July 2015, Tenaga submitted an indicative non-binding proposal to acquire 15 of 1MDB’s power assets. All eight of which are international power assets. The main concern is that the acquisition price of these assets.

However, management has constantly reiterated that the acquisition will only be executed at a fair price. Khazanah, the government fund, only takes up two of the seven seats on the board of directors. Thus, the probability of the government having an overruling say is lower. Theoretically, Khazanah’s 29.66% stake does not grant the government voting and veto rights when the acquisition is put to a shareholder’s vote. Moreover, Khazanah would not be able to vote in this related party transaction. (Ministry of Finance is the shareholder of Khazanah and Edra). It means that this increases the likelihood of a bad deal being blocked. In terms of top-line growth, we would not expect growth coming from increased electricity penetration given Malaysia’s approximate penetration of 100% according to data from World Bank. Base-tariff revision by 15% led to 15% top-line growth in 2014. However, base-tariff should also remain the same as it has already been set at 38.53 sen/KWh until FY17 (since 2014). Given the matured profile of the industry, it would be reasonable to assume a normalized top-line growth rate of 5% or less in the upcoming years.

Tenaga is currently trading at 10x forward PE, which is its lowest in ten years. This I believe is rather low for a resilient business. However, the valuation might be affected by the uncertainty surrounding its acquisition of the 1MDB assets and investor skepticism regarding the implementation of the ICPT mechanism. Will Tenaga trade to a higher valuation? This depends on whether the potential acquisitions are deemed fair by investors. Secondly, it depends on whether the ICPT is successfully implemented – even in a high fuel price environment. This could significantly improve investor confidence in Tenaga. Rerating aside, earnings growth should be stable in perhaps the next twelve months due to a low fuel price environment. Submit your email address for our FREE Asia-In-Focus Report!

We will only provide you with information relevant to value investing. You can unsubscribe at any time. Your contact details will be safeguarded. The information provided is for general information purposes only and is not intended to be any investment or financial advice. All views and opinions articulated in the article were expressed in the author’s personal capacity. It does not in any way represent those of his/her employer and other related entities. Gareth Wee does not own any companies mentioned.