Listed on SGX since 20 September 2005, Starhill Global REIT is a Singapore-based Real Estate Investment Trust (REIT) investing primarily in real estate used for retail and office purposes, both in Singapore and overseas. It was formerly known as Macquarie MEAG Prime REIT and set up by Macquarie but Malaysian property developer YTL Corp took over the Macquarie Group’s entire interest and renamed it as Starhill Global, thus becoming its new sponsor.

Starhill Global REIT has grown its initial portfolio from interests in two landmark properties on Orchard Road in Singapore (Wisma Atria and Ngee Ann City) when it first listed to 13 properties in Singapore, Malaysia, Australia, China and Japan valued at about S$3.12 billion as at 30 June 2015.

For a better understanding of Starhill Global’s business, a better understanding of REITs is needed. REITs are investment trust, vehicles that owns and invests in real estate (anything from retail – malls; commercial – office premises; industrial – warehouses, factories, business parks; healthcare – hospitals, nursing homes; hospitality – hotels, serviced residences, resorts; residential and others) and its main source of gross revenue comes from renting these properties to tenants. Basically, you can think of a REIT as a landlord. In exchange for special tax concessions, it has to distribute 90% or more of its distributable income to shareholders (thus they have higher yield as compared to other companies). Note that this distributable income is not necessary the net income a REIT generates. It also includes adjustments on the net income such as management fees, trustee fees and fair value gain/losses of investment properties. Thus, key line items to look out for when evaluating a REIT would be the Distribution Per Unit (DPU) and net property income (NPI) which is the REIT’s version of gross profit based on netting off the REIT’s gross revenue with property-related expenses (i.e. insurance, utilities etc).

For Starhill Global, it has 13 properties under its portfolio, namely Wisma Atria and Ngee Ann City on Orchard Road in Singapore; Starhill Gallery and Lot 10 Property in Kuala Lumpur, Malaysia; the Myer Centre in Adelaide as well as the David Jones Building and Plaza Arcade in Perth, Australia; Renhe Spring Zongbei retail property in Chengdu, China and five properties in the prime areas of Tokyo, Japan. The asset value, geographical and segment breakdowns are as follows:

As seen from above, Starhill Global’s landmark properties in Singapore (Wisma Atria and Ngee Ann City) are the main revenue driver of the business with 65% of gross revenue deriving from them. Thus, any analysis of Starhill Global must inadvertently focus on these 2 properties.

Currently, the outlook for retail and commercial REITs for Singapore are not so rosy. The huge supply pipeline of office spaces coming online in 2016 and 2017 has a depressing effect on commercial rents while prime retail rents in Orchard Road are likely to remain flat due to the decrease in tourist numbers, (affecting shopper traffic and tenant sales). However, this might be counterbalanced by the scant new supply of retail properties coming up on Orchard Road (only 268 Orchard Road is coming up in 2H/2015).

Despite the unfavourable macroeconomic factors, we still think that rents from Wisma Atria and Ngee Ann City for Starhill Global will hold up. One factor is because of the prime locations of its Singapore properties, as both are easily accessible by train and providing approximately 200 metres of prime street frontage. Also, 86% of gross revenue from Ngee Ann City is attributed to the master lease contributions from Toshin Development (which expires in 2023), providing long-term income stability. Furthermore, rental contributions from these two properties are less volatile as compared to the rest of Orchard Road even during the years leading up to the financial crisis (as shown below).

Moreover, the firm is also actively engaged in portfolio lease management. Starhill’s Singapore portfolio’s NPI up 4.3% y-o-y on positive rental reversions and high occupancies despite the decrease in average passing rent in the Orchard area from $34.60 to $32.20 over the same period. Furthermore despite the fact that occupancy rate for 1Q15 is 92.8%, Starhill has maintained an occupancy rate of near 100% for its Singapore properties since listing. 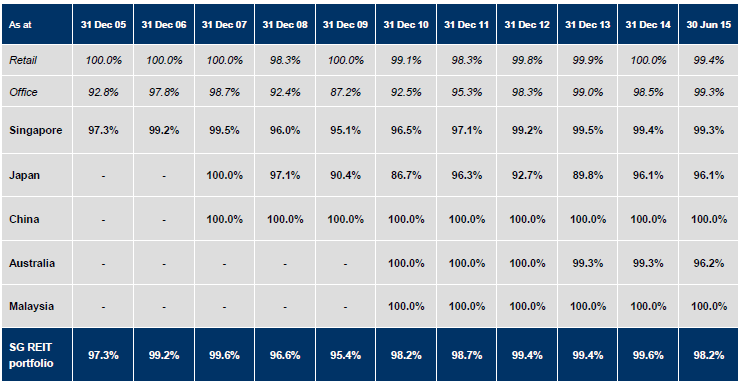 Looking at the Malaysian portfolio, both properties (Starhill Gallery and Lot 10) are located in the prime Kuala Lumpur shopping district. Starhill Gallery continues to attract internationally renowned luxury brands such as key tenant Louis Vuitton which tripled its presence in the mall with the opening of its first global boutique in Malaysia in 2014. For Lot 10, improved transport connectivity in the area is anticipated to increase shopper traffic with a new train station expected to be up soon to serve a corridor with a population of 1.2 million in the Klang Valley. Moreover, occupancy rates have always been at 100% for the past few years. Both Starhill Gallery and Lot 10 Property are leased out to a master lessee, Katagreen Development Sdn Bhd, providing continued income stability. Katagreen Development is an indirect wholly owned subsidiary of YTL Corporation Berhad, thus it likely will continue its rental agreement with Starhill.

For the Australian portfolio, the properties are also located in prime locations. Myer Centre is the largest CBD shopping mall in Adelaide and located in the heart of the city’s premier retail area along Rundle Mall. For the David Jones Building and Plaza Arcade, both properties are located next to each other in the heart of Perth’s central business district. Therefore, the Australian properties have a large catchment area and shopper’s traffic – attracting quality tenants and higher rental rates.

Peers of Starhill Global are selected on the basis of being purely a retail REIT player or a mixed REIT with substantial commercial portfolio. – Starhill Global has the longest weighted average lease to expiration (WALE) of 6.8 years, which is twice more than the average of its peers at 3.4 years. This means that income generation will be less lumpy over the coming years as the expiry of different lease terms are more spread out over the years. The only exception is the coming Katagreen Master Lease which will expire in 2016. However, we feel that since Katagreen is related to YTL, it will be likely to extend its lease.

– Starhill also has one of the highest occupancy among its peers, indicating proactive lease management or prime property location which attracts tenants.

3) Management which continues to seek maximization of value

From the time since YTL became the sponsor of Starhill at the end of 2008, the management has sourced and acquired 5 malls over the past years: Myer Centre Adelaide (Adelaide, Australia), David Jones Building and Plaza Arcade (Perth, Australia), Starhill Gallery and Lot 10 (Kuala Lumpur, Malaysia). An analysis of the transactions will allow us to understand whether the management has been seeking to maximize to purchase yield-accretive properties.

– For the David Jones building, despite being an iconic building, was bought in February 2010 at approximately book value from Centro Properties Group at 7.9% NPI yield/cap rates and at a time when the Australian property cycle is near a trough (average of 7.7% cap rates); though it was partially financed by an Australian loan of high interest rates between 6.56 %– 7.44% per annum.

– For Lot 10 and Starhill Gallery, these were bought in April 2010 from YTL Hospitality (which was formerly known as Starhill REIT) to make it into a pure play hospitality platform. As this is an internal party transaction, 40% of the consideration was paid in convertible preferred units (CPU), marginally increasing leverage and financing cost (since CPU are equity). According to Starhill, cap rate is 6.8% for both properties, therefore being a yield-accretive purchase.

– The Plaza Arcade in Perth was bought at a NPI yield of 7.8% (based on the passing net income per Colliers valuation as at 3 December 2012) in January 2013, signifying a yield-accretive purchase since it was partially financed by a revolving credit facilities (of 1.20% – 1.66%).

– Myer Centre Adelaide was bought at a NPI yield of 6.6% in April 2015. Assuming that the Acquisition is funded by internal working capital and debt (approximately A$145 million and S$150 million term loans), it is expected to give a DPU accretion of 2.8%. It will provide stable income generation since Myer, its anchor tenants, contributes 47% of the gross rent and with its lease expiring in 2032 (overall WALE is around 9.6 years). Further upside includes an annual rent escalation of fixed 5% or CPI for retail leases and annual 3.5% step-up for office leases. Furthermore, level 4 and 5 of retail centre 114,000 sq ft or 18.9% of NLA are not used.

– Completed the asset redevelopment works at Wisma Atria Property on schedule in July 2012 and achieved a ROI of 12.8%, which is higher than the 8% initially projected

– Going so far as to go to court with its master lessee, alleging Toshin Development was using its relationship with valuers to negotiate for below market rate rentals (it did not achieve its objective though as the Court of Appeal did not find that the rent review mechanism had been rendered inoperable but the Court still revisited the rental rates by appointing three valuation firms to determine the prevailing market rental rates)

The diagram below shows the different options available Starhill’s management to maximize value: There is no known acquisition pipeline for Starhill as YTL is not developing new retail properties currently. However, we do not think the sponsor is not just using Starhill as a dumping ground for its property and are really keen in growing the business. This can be seen from the fact that Starhill has been actively sourcing for property acquisitions from third party vendors as two-thirds of the properties it bought since 2009 came from third parties and also because YTL has increased its stake of Starhill from approximately 26% in 2008 to 37% in 2015 (though the increase is mainly due to the conversion of CPU for the purchase of the Malaysian property). Even though it was an internal party transaction, the CPU was issued at a 30.0% premium over the VWAP of the Units over the last five trading days immediately prior to the date of issuance of the CPUs, which means that YTL has to grow Starhill’s share price in order to convert these CPUs at a gain. Currently, all CPUs have been converted and so there is no more downside risk from dilution of units for normal unitholders.

2) Difficulty to do full scale AEI for Singapore properties

16.0%, 13.5% and 2.0% of its gross revenue is derived from Australia, Malaysia and Japan respectively. All these currencies have been weakening over the past few months. As such, forex risks remain to have a huge depressing effect on Starhill’s distributable income.  However, since Starhill’s debt is also denominated in AUD, JPY and Ringgit, they serve as a natural hedge due to the fact that interest payments are also now cheaper.

Based on advance estimates, the Singapore economy grew 1.7% in 2Q 2015, slower than the 2.8% growth rate recorded in the previous quarter. Furthermore, the retail landscape in Singapore remains tepid and YTD May 2015 international tourist arrivals to Singapore is down 4.1% y-o-y, but recorded a 1.1% y-o-y increase for May 2015. A prolonged slowdown in the Singapore economy might hurt the trust’s performance.

As shown above, 37.09% of ownership belonged to its sponsor, YTL Corporation, one of the largest companies listed on the Bursa Malaysia, which has a combined market capitalisation of US$8.4 billion together with four listed entities in Malaysia.

All views and opinions articulated in the article were expressed in You Yue’s personal capacity and do not in any way represent those of his employer and other related entities. You Yue owns shares in Starhill Global REIT.