Skip to content
HomeOpinionAsia-In-FocusSpot The Oxymoron; The Open China And The Close USA

#This is our exclusive Asia-In-Focus Monthly Report for our email subscribers. This report was first published on the 28th May 2017.

Spot The Oxymoron; The Open China And The Close USA

How The World Has Changed In 200 Years

About 200 years ago, the western powers have just started the industrial revolution and it led to a huge boom in their economies. It is also the start of what we call globalisation today. Nations, instead of being self-reliance, are turning to trading with one another. This push for globalisation has caused many wars as nations tried to influence isolated countries into opening their economy for trade. One of the most significant event during that period was the opium wars. The wars forced an isolated China to open its economy, losing many of its key territories and ultimately marked the beginning of the end for the Qing dynasty.

Ironically, 200 years later, we are seeing a very similar story playing out; just with the roles of the nations reversed. This month, China held the Belt and Road Forum for International Cooperation, bringing close to 30 nations together to discuss the future of its One Belt One Road (一路一带) initiative. China hopes to create the modern Silk Road that improve the trade and economic integration between countries in Asia, Europe and even Africa. This massive plan would affect about 65 countries with a combined gross domestic product (GDP) of about US$21 trillion. 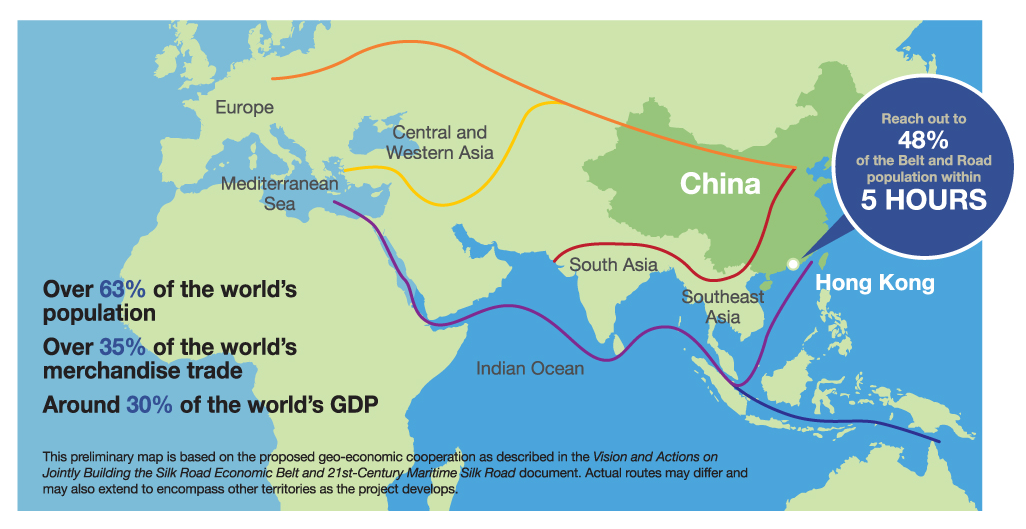 While on the other side of the Pacific, the current US administration is looking at ways to push forward more protectionist policies, with possible trade tariff, scrapping Free Trade Agreements and ending talks in the Trans-Pacific Partnership deal.

Before we ponder about how all these would end, it is worth revisiting the history of the opium wars and what we might learn from them.

*I summarised 60 years of history into just a few hundred words. So bear in mind some important information might be left out here.

By the early 1800’s, the United Kingdom’s economy is in a very tense situation. This was mainly due to the many wars it had fought in the past few decades, one of which was its loss in the American Revolutionary War. The empire was then looking eagerly for new sources of revenue.

China was then an isolated country, with a relatively self-sustainable economy managed by the Qing Dynasty. Still, Chinese goods were in high demand in Europe and the UK was running a huge trade deficit against the middle kingdom. In particular, the UK was very dependent on the import of tea from China.

Unfortunately, the Chinese was not that interested in free trade and view the foreign powers with suspicion. Therefore, there were many trade barriers, such as having only designated ports for import & export, and high tariff implemented for overseas trades.

Being an internationalist, the UK saw this as a wildly unfair trade system and wanted to find ways to change it. They tried using diplomacy at first, which clearly did not work. Then, the British found the answer to their problem; opium. They realized that poppy plants grew well in their newly colonised land of India. Their plan was to use opium to offset the trade deficit they were having with China.
There was just one small issue, opium was technically illegal in China. So, through the network of other non-official traders and smugglers, British opium found its way into China. However, as the opium trade became larger and larger, it started creating many social problems for China. Thus, the Chinese officials decided to crack down on the drug trade.

And that started the First Opium War from 1839 to 1842, and ended in China ceded the Hong Kong Island and granting “Most favoured nation” status to the UK, helping the empire expand its trade massively with China.

However, the weakness shown by the Chinese was quickly picked up by other foreign powers. They also began pushing China to open up more trades with them. They pushed and pushed. By the end of the Second Opium War in 1860’s, China had to open about 80 ports to the foreign powers, including the UK, France, Russia and the USA.
The humiliating loss of China led to many social unrests within China and marked the beginning of the decline of the Chinese Qing dynasty.

Why Does This Matter?

It is important because we might be seeing history repeating itself before our eyes, albeit in the other direction.

China has clearly seen the benefit of globalisation. The demand for its goods by the western world have help it grew at a rapid rate over the past three decades. But at the same time, the western world is realizing that too much of a good thing (globalisation) is not necessarily good at all. It has created huge trade deficits for many of them and formed social tensions within their society.

Yet, this time around, instead of finding ways to force China to import some of their products to offset the trade deficits, countries like the USA are looking inwards. Thus, the current administration is looking for ways to implement more protectionist policies. From their point of view, they are not against trade but merely trying to “fix the unfair trade practices used by China”. In other words, all they want is “fair trade”. Unfortunately, the term fair trade is subjective in nature.

If trade barriers and tariff are put up in the US and it is targeting Chinese imports into the country, would China just take it sitting quietly? Trade is a two-way communication, we cannot assume that the action of one country (like creating trade barriers) would be met with inaction from the counterparty.

Most likely, it might lead to some form of retaliation by the Chinese. How would the US response then? What will be the subsequent series of events that might follow? If one party pushes too far, it might create an irreversible path for one of the superpowers. That path is especially vulnerable for the US.

This is because, just like during the Opium Wars period, there are many other parties waiting to take advantage of the situation. Terrorist groups such as ISIS, North Korea, opponent of the US like Iran and Russia are clearly looking for ways to spread their influence globally.

We have seen it first hand during the 2014 annexation of Crimea by Russia. Russian saw that the US was overstretched with the wars in both Afghanistan and Iraq. They took the opportunity to take control of Crimea and predicted (correctly) that the US would not be able to do anything about it. These are the type of events that might happen if the US were to weaken considerably.

We are at a major transition point in world’s history. Some questions we need to ponder are:

From the point of view of countries within Southeast Asia, or even the Asia Pacific, we would benefit if there is a balance of power between the US and China in this region. This would ensure that both superpowers engage us (smaller nations) according to the rule of law. More importantly, the two powers would be able to keep each other in check., protecting the little guys like us.

Unfortunately, that does not seem to be the direction we are heading. Even though China like to talk about the “Peaceful rise of China” but how China is dealing with the South China Sea issue is giving us a taste of what does that really mean. For many of the smaller countries in Southeast Asia, the political, military and economic leverage China has over our economies means that we are very much at its mercy. And now that the USA has withdrawn from the Trans-Pacific Partnership, it is almost like the US is serving Southeast Asia, (or even Asia Pacific), to China on a silver plate.

Till we speak again,