On 29 October 2018, SP Setia Berhad is crowned as the top property developer in Malaysia. Indeed, it is an amazing feat considering that S P Setia Bhd is winning the top spot of The Edge Malaysia Top Property Developers Award (TPDA) for a third consecutive time this year.

Is that good news to its shareholders? Like always, the question is: ‘Should we dismiss S P Setia Bhd as an investment or do we view this as an opportunity to grab some of its shares?’

To me, I believe the answer lies in its fundamental strength and its current plan to grow in the near future. Here, I’ll share how I would assess S P Setia Bhd as a potential candidate for investment. Therefore, here are 5 things to know about S P Setia before you invest.

S P Setia Bhd is a pure-play property developer in Malaysia. It is recognised as a master developer of townships, eco-sanctuaries, luxury enclaves, and high rises mainly in the Klang Valley. Beginning with its flagship township development of Setia Alam, S P Setia Bhd presently has 46 ongoing projects located in the Klang Valley, Johor and Penang in Malaysia and abroad namely Singapore, the United Kingdom, Australia, China, and Vietnam.

Dato’ Khor Chap Jen is the President and CEO of S P Setia Bhd. He took over the helm of leadership from Tan Sri Dato’ Sri Liew Kee Sin, a figure widely known as the man behind the success of S P Setia Bhd. Presently, Liew is the Chairman of Eco World Development Group Bhd.

Nevertheless, Khor himself is not a new kid on the block. He has been a staff of S P Setia Bhd since 1995 and had worked alongside with Liew to build S P Setia Bhd to where it is today. However, Khor is not a substantial shareholder of the company as he owns 911,706 shares or 0.02% shareholdings of S P Setia Bhd.

The other directors do not own any shares of S P Setia Bhd.

Essentially, the Malaysian government is the main shareholder of S P Setia Bhd.

Overall, S P Setia Bhd has delivered growth in both sales and profits for the last 10 years. Revenues increased from RM 1.47 billion in 2008 to RM 6.75 billion in 2015 before recording a back-to-back-decline to RM 4.52 billion in 2017. This is due to a repositioning of its new property launches as a response to a soft local property market since 2016. As at 30 June 2018, S P Setia has non-current liabilities of RM 7.71 billion, thus, has a gearing ratio of 48.2% when calculated based on total equity of RM 16.01 billion. S P Setia Bhd has a current ratio of 1.85 and a cash balance totalling RM 3.68 billion. They would be used to fund its ongoing and pipeline of projects in the immediate future.

Moving forward, S P Setia Bhd remains committed to its sales target of RM 5.0 billion for 2018. It has sold RM 2.1 billion worth of properties in H1 2018 and is planning to launch properties worth RM 4.05 billion in H2 2018. This includes a new launch of Daintree Residence in Singapore worth S$ 485 million. 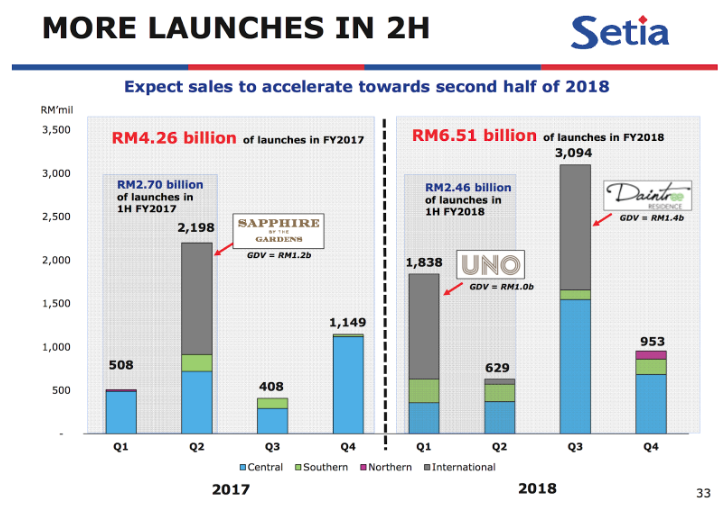 In the longer term, S P Setia Bhd has an effective remaining land bank of 9,587 acres worth a potential gross development value (GDV) of RM 155.94 billion as at 30 June 2018. This provides income visibility to S P Setia Bhd in the long run. So, what is my verdict?

Frankly, an investment in S P Setia Bhd has both merits and demerits. They are:

Like always, I wouldn’t give you a definite final answer. I believe, as an investor, we should first understand and assess both the potential rewards and appetite for risks before venturing into an investment.

You call the shots.