In July 2000, Dr. George Quek has opened its first Breadtalk outlet at Bugis Junction. Promptly, Breadtalk has expanded into a well-known local bakery brand in Singapore. It was subsequently listed on the SGX in 2003. Since its listing, Breadtalk has ventured into restaurants and food atriums and grown its presence in 17 different countries worldwide.

As I write, Breadtalk Group Ltd (Breadtalk) is among Asia’s leading food & beverage conglomerates worth S$ 524.3 million in market capitalization. In this article, I’ll list down 8 key things that you need to know about Breadtalk before you invest. 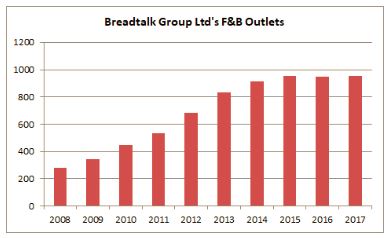 Here are the key highlights of Breadtalk Group Ltd moving ahead:

On 3 January 2018, Breadtalk has signed a joint venture agreement with Perennial Real Estate Holdings Ltd to incorporate Perennial HC Holdings Pte Ltd. The total capital commitment is US$ 1.2 billion and is planned to be used to acquire and develop large-scale and predominantly healthcare integrated mixed-use developments in China. Breadtalk holds 5% stake in this joint venture for the first closing amount which is US$ 25 million and it will be funded through internally generated fund.

On 18 January 2018, Breadtalk has signed a franchise agreement to establish the Breadtalk Bakery Chain in New Delhi and National Capital Region in India with Bakekneads LLP, a member of the Som Datt Group of Companies. Breadtalk is expected to open its flagship store in Delhi by 3Q 2018.

On 26 January 2018, Breadtalk has opened its 1st Song Fa restaurant in Shanghai Jing An Kerry Centre. On 12 March 2018, Breadtalk has entered into a joint venture agreement via its 100%-owned subsidiary, Shanghai Star Food F&B Management Co. Ltd (SSF) with Wu Pao Chun Food Ltd to operate the Wu Pao Chun brand of bakeries in Beijing, Shanghai, Guangzhou and Shenzhen. In Shanghai, SSF will hold 80% stake in the joint venture. Meanwhile, for Beijing, Guangzhou and Shenzhen, Wu Pao Chun has the option to participate up to 40% shareholdings in the joint venture.

For further enquiries or to request for additional investment information on Breadtalk Group Ltd’s Investors Relation matters, you may contact:
Mr. Benjamin Tay

As at 1 March 2018, the substantial shareholders of Breadtalk Group Ltd and their respective shareholdings are as followed:
– George Quek Meng Teck: 34.00%