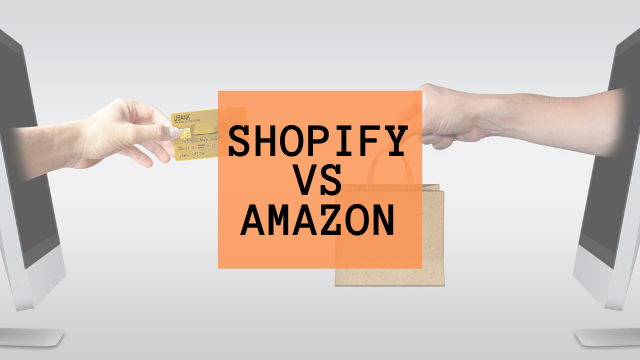 David versus Goliath. The famous quote that traces itself back to the biblical story, describing an underdog becoming the unexpected winner.

The US E-commerce perhaps is one of the spaces that see multiple “Davids” come head to head with a Goliath. Perhaps the more well-known David in the US E-commerce space is none other than Shopify Inc (NYSE: SHOP). The Goliath? Well, it has to be Amazon Inc (NASDAQ: AMZN).

Both companies share a similar success story amidst the gloomy economic outlook. For instance, both companies saw their share prices break new highs during the peak of COVID-19. But with Amazon being the undisputed king of e-commerce, where does Shopify stand?

A Deep Dive into E-commerce

E-commerce can actually be further broken down into subcategories. Amazon, Alibaba, Shopee, Taobao are examples of a segment of e-commerce known as an online marketplace.

Think of an online marketplace like a departmental store, such as Parkson, Robinsons or even TANGS. Inside a departmental store, there are plenty of sections, selling different products. These products range from kitchen utensils, pots and pans, to electronic appliances. There are also clothes, baby-related stuff and a whole lot more.

Amazon.com. Selling most of the things under the sun

So, Amazon is a platform for sellers to list their products and for buyers to purchase them after browsing through and seeing what they like. One can find multiple brands for the same item. So online shoppers can compare prices from different sellers and compare different brands of the same product.

On the other spectrum of e-commerce, is an online store. Usually hosted by a website of a brand, an online store sells products of a standalone or collection of brands, which are usually in the same product category. And this is where Shopify fills in the gaps.

Installed a plug-in that enables me to see what kind of E-commerce app that each online shop is using.

And personally, I think online stores are sleek and elegant, compared to online marketplaces!

Shopify Inc. is a Canadian company founded by Tobias Lütke, Daniel Weinand, and Scott Lake in 2004 under the name Snowdevil. It was originally planned as an online store for snowboarding equipment (hence the name).

But in creating a promising and seamless online store that it eventually evolved into Shopify in June 2006. Shopify grew in leaps and bounds, growing from a purely online store website to also include payment solutions. It also started making a presence in the traditional brick and mortar stores by offering a point of sales systems. Fast forward to the year 2015, Shopify Inc. got listed on the New York Stock Exchange and Toronto Stock Exchange.

Shopify is tagging on to the rapid growth of e-commerce. Its revenue has grown at a Compounded Annual Growth Rate (CAGR) of around 53%! Though it has kept its gross profit margin relatively stable, it has reported increasing losses year on year.

Around 64% of its expenses are derived from selling, general and administrative expenses while the remaining is invested in research & development.

Cash Flow from investing activities and financing activities are showing some inverse correlation. The more cash is raised, the more it is plough into their capital expenditures and investments. Cash raised along the years has been utilized to acquire other smaller companies and applications like Botlmade, Oberlo, Handshake, 6 River Systems to further improve its product offerings. With these strategic investments, Shopify has also started venturing into fulfilment services and last-mile deliveries. It too has also entered the payment solutions industry by offering Point-Of-Sales (POS) solutions for brick and mortar shops.

The Future & Prospects for The David of E-commerce

Online stores are poised to be the next frontier of e-commerce. Which is why companies like Shopify are in the right place and the right time. As online shoppers grow to become more and more demanding and sophisticated, there will be a potential shift from an online marketplace to an online store.

Put simply, we could be seeing history repeating itself. This is the same story that has happened in the brick and mortar scene. Departmental stores which house all kinds of products like AEON, Parkson, Metrojaya, The Store, Isetan, Marks & Spencer definitely face tough competitions, especially in the luxury and apparel segment outlets like Coach, Dior, UNIQLO, Zara and many more.

As online stores slowly gain popularity particularly in the United States & Europe, Shopify has seen explosive growth in their revenue. Shopify usage has been on an exponential rise and has yet to reach full potential with other regions like Asia, which have yet to adopt a more online store-centric approach.

Shopify’s next move is on Shop, an app that allows users to follow a particular store similar to Instagram. Users can then screen through store products and when they decide to make a purchase, a tap on the product will bring them to a browser with the product as the main page, ready to be inserted to their shopping carts.

As promising as Shopify is when it comes to riding the next e-commerce wave, they are not alone. There are plenty of similar companies in the same sphere. Companies like WooCommerce, Wix and SquareSpace also offer tip-top services into helping small to medium enterprises set up a sleek and effective online store.

There are also threats from big tech companies like Amazon and Facebook. Amazon still commands the biggest slice of pie in the e-commerce space, while Facebook is working on its Facebook Marketplace and Instagram, which is also dipping their hands deep into e-commerce. Shopify as of currently only serves enterprises which have a tangible product to sell, hence it isn’t really reaching out to companies or individuals which are providing services.

All in all, Shopify Inc. does seem to be an interesting company to keep an eye on. Unlike Zoom Video Communications which has spurred a counterattack from Facebook & Google to improve its video calling apps and services, Shopify is currently quite safe from Amazon’s fangs. However, with the company still burning through cash to find an edge to fend off competition, it is still unsure whether it could be a clear winner in this competitive space.

Definitely a company to keep an eye on, but still a bit too early to be dipping our hands into it as an investment.

2 Stocks To Own For The Next Decade