THIS ARTICLE WAS FIRST WRITTEN BY SUDHAN AND PUBLISHED ON FINANCIALLYFREENOW 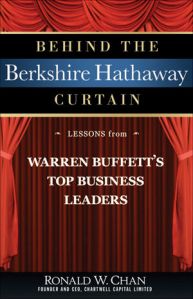 “Behind the Berkshire Hathaway Curtain” is a book authored by Ronald Chan. He is also the author of “The Value Investors”, which I once reviewed.

Some of the remarkable quotes from the book are:

A common thread in the book was that hard work and integrity are paramount if one wants to succeed in life.

Some of the leaders have also said that Buffett’s focus on the long-term, instead of short-term profitability, really helps them to focus on building their businesses. Brad Kinstler of See’s Candies quipped, “Warren looks at the long-term picture. Because he does not put us in the position of needing to achieve consistent revenue and earnings growth in all economic environments, we can shift our attention to the long term”.

Let me sign off with my most favourite quote from the book:

“When my father, Edward, passed away in 1980, everybody in town came to his funeral to pay tribute. He died without an enemy and money can’t buy that. Perhaps the number of people who attend one’s funeral is a measurement of success.” – Barry Tatelman

The Manual of Ideas: The Proven Framework for Finding the Best Value Investments by John Mihaljevic