It was the early 20th century.

At that time, Chinese migrants have settled down in British-ruled Peninsula Malaya and Singapore, building thriving enterprises, amassing a fortune for themselves. In those days, Chinese businessmen could obtain financing from foreign banks. However, it was inconvenient for some of these businessmen as they could not converse in English.

As such, there was a need to set up Chinese banks to cater to the financing needs of these Chinese businessmen. This led to the establishment of Kwong Yik (Selangor) Banking Corporation (Kwong Yik) on 15 July 1913. It was the first Chinese or should I say ‘Cantonese’ bank to be set up in the Peninsula. This bank has proven to be resilient as it survived the Japanese Occupation during the World War 2 in the early 1940s.

Since then, the bank has undertaken several major merging exercises. This includes DCB Bank in 1993, Sime Bank in 1999, Bank Utama Bhd in 2003, and OSK Investment Bank in 2012. Today, RHB Bank Bhd has grown into the fourth largest integrated financial services group in Malaysia. As I write, RHB Bank Bhd is worth RM 19.0 billion in market capitalization.

Here, I’ll cover 9 quick things you need to know about RHB Bank Bhd before you invest.

Presently, RHB Bank Bhd derives bulk of its income from four main business divisions. They include:

Overall, RHB Bank Bhd has increased its total income from RM 4.83 billion in 2012 to RM 6.19 billion in 2016. This is due to continuous growth in net interest income, income from RHB Islamic Bank, fee and commission based income during the period.

RHB Bank Bhd has maintained its shareholders’ earnings at RM 1.5 billion – RM 2.0 billion a year over the last 5 years. This is because RHB Bank Bhd has incurred higher impairment losses on its loans, advances and financing assets which had effectively cancelled out the continuous growth reported above. 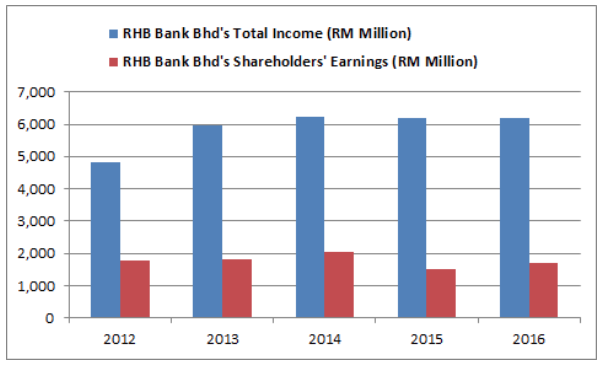 RHB Bank Bhd is embarking on its IGNITE 2017 initiatives to becoming a leading multinational financial services group by 2020. It aspires to derive as much as 40% revenues from its international operations while propelling its position to be among the top 3 banking groups in Malaysia.

On 22 August 2017, RHB Bank Bhd has ended its negotiations with AMMB Holdings Bhd on the proposed merger of the two banking groups as they are not able to reach an agreement on mutually acceptable terms and conditions of the proposed merger.

RHB Bank Bhd has identified several risks which are inherent to the banking industry. They include:

For further enquiries on RHB Bank Bhd’s Investors Relation matters, you may contact:

As at 14 February 2017, the substantial shareholders of Gamuda Bhd are: