Skip to content
HomeCase StudySGXMRT Operators Faced With A Catch-22 On the very morning our earlier article, “Late Again? Oh MRT Delayed lor” was posted, a delay occurred on the North-South Line, what were the odds! To their credit, SMRT Corporation Ltd (SGX:C52) hasn’t been just idling around but they have been attempting to rectify the situation through capital expenditure (Capex) projects.

So What Has SMRT Done So Far?

2)    Resignalling of the NS and EW lines

More information on the sleeper replacement works can be found in this entertaining infograph!

MRT operators in Singapore were faced with a “catch-22”, on one hand they had to spend money for capital improvement projects while on the other hand they could not freely raise fares. A situation of diminishing profitability with your top line increasing at a slower rate than your expenses clearly didn’t help the cause! 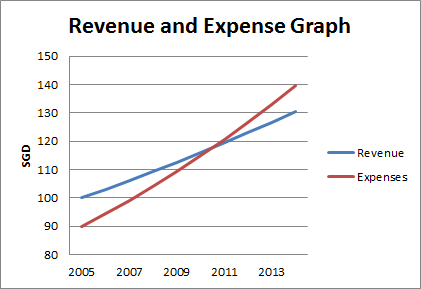 Above is a simple illustration, although Revenue started at a higher base of S$100, it increased at a lower rate of 3% compared to 5% per year for expenses. Basically it would lead to Expenses (Red Line) overtaking Revenue (Blue Line) and it isn’t good when that happens. Red > Blue = Not Good

Hence the need for the “Rail Financing Framework”!

SMRT’s MRT and Bus operational data looked pretty grim. It appears that MRT operations are going along the direction that the Bus has taken, into the red. With Revenues (CAGR: 6%) rising at a slower rate than expenses (CAGR: 8%) it’s only a matter of time before Operating Profit arrives at a red figure if things stay the same. Says a lot for a transportation company when the bulk of operating profits are derived from rental and advertising.

All the above data are available on the Public Transport Council (PTC) website under Chronology of Fare Adjustments! If you are interested on the MRT fares for each respective MRT lines, they are also displayed on the PTC website under Distance Fares (Note: Rapid Transit System (RTS) stands for MRT).

Now To Correspond With SMRT’s Data

Some may say to the above point on base fares that most people might not travel such short distances for the base fares. Now let’s take into account the average fares one would pay per ride!

This seemed to tally with the data that their Revenues in terms of fare raises wasn’t really pegged to their expenses!

From the above we can clearly see why a change is needed to the system, hence the introduction of the “Rail Financing Framework” to take the burden of capital improvements off the operators!

Another thing to take note of when researching is that we have to obtain data from multiple sources to see if they tally. In this case, we took the data from both SMRT’s public records and from the PTC to check the legitness of one’s claims!