Skip to content
HomeCase StudySGXKimly Limited vs Koufu Group Limited, Which Is a Better Investment?

As two listed players with an almost identical business model, it makes an interesting case to compare and contrast their business in a bid to determine which is a better-quality company.

In this article, I will be comparing the FY17 results for both. Kimly’s figures will be obtained from its annual report, while Koufu’s info will be extracted from its IPO prospectus.

Under its Food Retail division, it has 129 food stalls and 1 Live Seafood restaurant stall by one central kitchen.

Based on its IPO prospectus, Koufu has 17 brands across all its outlets which include the likes of Koufu food court, Gourmet Paradise and Happy Hawkers.

Hence, Kimly’s Profit after Tax margin would be 11.1%. 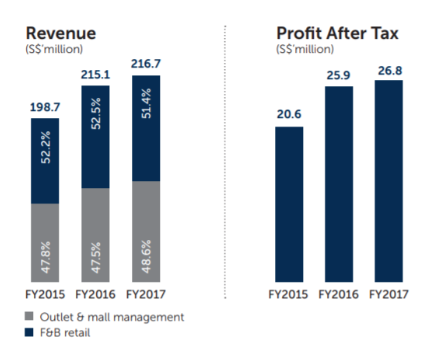 It is clear that Koufu enjoys a larger revenue and Profit after Tax. It seems to be more efficient too, based on a higher margin.

As for Koufu, its Total Assets is $107 million while Total Liabilities is $64.1 million. Hence the Total Debt to Asset Ratio would be 59.9%.

It is worth noting that Kimly has zero debts and borrowings on its balance sheet, while Koufu has $1.75 million in debts. However, with its Cash & Equivalent balance of $53 million, Koufu’s borrowings is not a cause for concern.

Koufu’s Net Operating Cashflow was even higher at $50.1 million. Amazingly, the cash flow is almost twice the amount of Profit after Tax ($26.8 million).

Both companies can be said of generating a healthy amount of cash flow as far as FY17 is concerned.

F&B business is a challenging one primarily due to rising costs and intense competition. Indeed, there are plenty of eateries in both the heartland and city area offering a diverse range of options to consumers. To those who dine often in coffee shops or food courts who are Kimly and Koufu’s key target audience, the price would be a key determinant to their dining decisions.

Both companies cited similar growth strategies. Firstly, strategic expansion to gain greater market visibility while concurrently refurbishing existing outlets where possible. In this aspect, Koufu may have an edge as it already has one foot in Macau while Kimly is purely a local play.

Next would be to improve productivity and via innovation and automation. Both companies are moving into electronic payment which I have seen in Kimly coffee shops that accept digital wallet such as Pay Lah. There are also other measures to lower cost, such as the smart tray return robots seen in some of Koufu’s food courts.

Online food ordering and delivery service is another area. Koufu plans to roll out such service to all of its outlets by 2019, while Kimly has already embarked on this since late 2016.

Lastly, recognising the importance of an integrated facility in supporting a large number of food stalls, both operators are pumping in the capital on this front. Kimly is expanding its central kitchen to double its production output, while Koufu is building a new integrated facility that will also house its Training and Research Development Centre.

Kimly’s Earnings per Share is 2.07 cents while Koufu’s adjusted EPS after IPO and issuance of Cornerstone Shares is 4.83 cents. Based on the share closing price of 23 Jul, Kimly’s PE ratio is 16.9x while Koufu’s PE is 12.9x.

Koufu Group Limited have larger revenue, higher earnings with a better profit margin. However, it has a weaker balance sheet than Kimly, although, by all measures, its gearing is considered healthy too. Koufu generates more operating cash flow by virtue of its larger sales, and is trading at a lower earnings multiple.

While this simple exercise seems to suggest that Koufu would make a better investment, it is by no means conclusive. With both companies’ business being very similar, it is down to a better execution of its growth strategy.