UOL Group Ltd has its roots traced back to 1963. In that year, Faber Union (HK) Ltd had incorporated Faber Union Ltd and subsequently, listed the company on the SGX in 1964.

Nine years later, Wee Cho Yaw, a prominent banker in Singapore, had acquired a controlling stake in Faber Union Ltd. In 1975, Wee has renamed the company to United Overseas Land Ltd. Then, in 2016, the company was renamed to UOL Group Ltd. As of 30 June 2018, UOL Group Ltd has reported having total assets worth S$ 19.9 billion and thus, is a leading property corporation in Singapore.

In this article, I’ll share UOL Group Ltd’s past performances, its future projects, and tools to evaluate the stock as an investment. Thus, here are 8 main things that you need to know about UOL Group Ltd before you invest. As of 30 June 2018, UOL Group Ltd has reported non-current liabilities of S$ 3.3 billion. Thus, its gearing ratio is 35.0%. It has a cash balance of S$ 739.7 million and the current ratio of 1.95. Thus, UOL Group Ltd remains a healthy balance sheet and is capable of funding its working capital and projects for future growth.

As of 30 June 2018, UOL Group Ltd has the following ongoing projects:

It intends to launch the following projects: 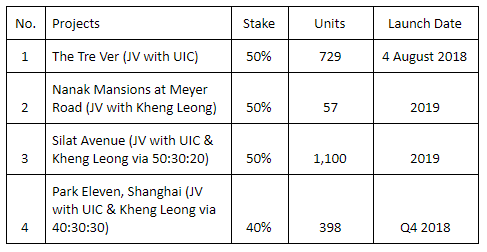 As of 31 December 2017, UOL Group Ltd had enjoyed above 90% in occupancy rate for its property investments in Singapore. The exceptions are the Gateway (89%) and Marine Square Shopping Mall (84%). In total, UOL Group Ltd has a portfolio of investment properties worth S$ 10.93 billion and would continue to derive income from them in the future.

As of 30 June 2018, UOL Group Ltd has 34 hotels in operations. In addition, the conglomerate has 8 hotel development projects in its pipeline. Presently, UOL Group Ltd is embarking on several key projects which include:

As of 8 March 2018, the major shareholders and their interests in UOL Group Ltd are as followed:

With limited projects-in-hand, UOL Group Ltd would continue to rely on its key investment properties for recurring income in the future. With high occupancy rates for these properties, they would act as an income stabilizer to the group.

Overall, UOL Group Ltd had delivered consistent dividends to its shareholders. At the current price of S$ 6.89 a share, its dividend yield is 2.54% if it keeps DPS at 17.5 cents.

UOL Group Ltd has achieved a CAGR of 11.40% at its stock price over the past 8 years. It is comparable with its CAGR in net asset value (NAV) of 9.85% in that 8 years. Hence, ‘Growth’ in NAV leads to ‘Growth’ in stock prices. The increase in NAV is influenced by its fair value gains (or capital appreciation) on its property investment and thus, would influence the rate of future capital growth of the stock price of UOL Group Ltd in the future.