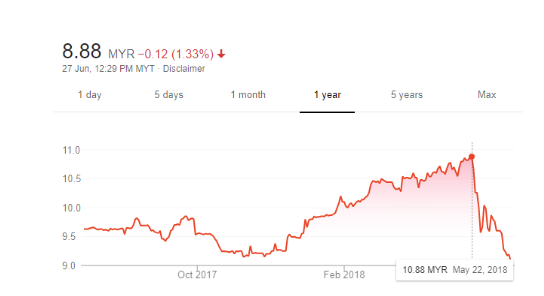 I believe the definition of a good stock varies from one individual to another.

After all, there is a saying, ‘Beauty is in the eye of the beholder’. In general, if you are a value investor, a stock is viewed to be good or ‘investment-grade’ if it has the following characteristics:

As such, I did a ‘Post-Mortem’ on Maybank to assess its investment potential. In this article, I’ll summarize my recent findings on Maybank and share a few simple methods of valuing Maybank shares. Thus, here are 11 key things that you need to know about Maybank before you invest. 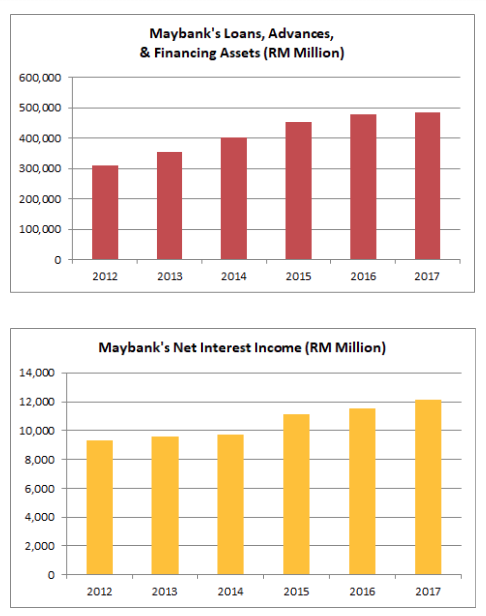 Maybank’s Non-Interest Income had increased from RM 5.33 billion in 2012 to RM 6.03 billion in 2017. This is mainly contributed by stable growth in its fee-based income that include underwriting fees, commissions, fees on loans, advances & financing, brokerage income, and service charges. 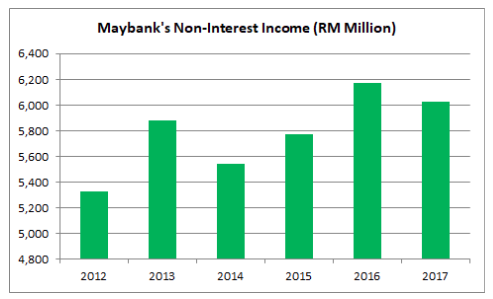 Maybank incurred high impairment losses on its loans, advances & financing assets over the last 3 years. Net Impaired Ratios increased from 0.95% in 2013 to 1.58% in 2017. This is caused by losses from credit facilities offered to a few sectors that are experiencing a slowdown. They include oil & gas, mining and shipping industries in Malaysia, Singapore and Indonesia. 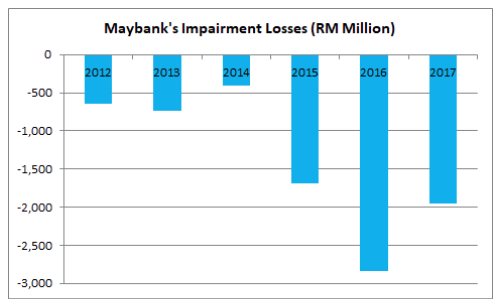 Maybank’s shareholders’ earnings had grown at a slower pace as the banking group’s high impairment losses had cancelled its growth in both net and non interest income achieved, particularly in 2015 – 2017. Earnings have increased from RM 5.75 billion in 2012 to RM 7.52 billion in 2017. 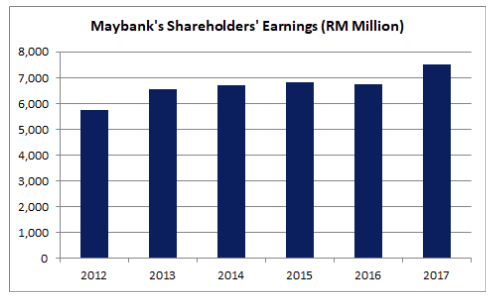 Maybank has reported total capital ratio (TCR) of 18.48% in Q1 2018, which is substantially higher than 9.875% required by Bank Negara Malaysia. Thus, it shows that the banking group has adequate funds to weather an economic crisis if it happens and to pursue growth in the future.

#6: Riding on Growth in ASEAN

Maybank is the only banking group to have a presence in all countries within the ASEAN region. Its key oversea markets are Singapore and Indonesia. The oversea markets have accounted for 25 – 30% of Maybank’s profits before tax (PBT) over the last 6 years.

Moving ahead, economies in the ASEAN region is expected to grow due to a boost in infrastructure investments from China, rapid growth in e-commerce activities, and a general rise in affluence levels across the region. For the next 3 years, Maybank has laid out its strategic objectives where it targets to be:

#8: Dividend Yield is on the High-Side

Maybank has maintained its dividends per share (DPS) at 50 – 60 sen for the last 5 years. Based on its stock prices, Maybank’s Dividend Yield:

From 2013 to 2017, Maybank had issued 10 series of DRP to its shareholders, allowing them to receive additional shares of Maybank instead of cash for its dividends. In most cases, the issue price for DRP is set at a marginal discount to the market price of Maybank shares close to the time of declaration.

For Maybank, the discount offered is usually around 5% from its stock price. So, should I accept or reject the DRP offer? Here, I believe your own answer is dependent on the following factors:

In this case, if an investor follows the formula where he buys Maybank when its P/B Ratio is low and Dividend Yield is high, he would successfully avoid a purchase on Maybank shares at RM 10.88 a share.

Maybank has delivered steady growth in profits and stable dividend payouts to its shareholders over the last 6 years. It is well-capitalized and is poised to capitalize on growth opportunities in the ASEAN region. The key risk lies in how well the banking group manages its asset quality as it incurred loss from loan impairments, particularly in 2015 – 2017.

So, is Maybank a good investment?

Well, I can’t answer that for you as it depends on:

If you are unsure, perhaps, it is best to take time to do some soul searching & craft an investment plan first before investing.