In 1979, Tan Sri Dato’ Lim Kuang Sia had founded Kossan Rubber Industries Bhd, a company now listed on Bursa Malaysia. It was involved in cutlass bearing for the fishing industry. 10 years later, in 1989, Kossan started its venture into glove manufacturing with its first factory in Klang which was capable of producing 720 million pieces of gloves per annum.

Kossan expanded and was subsequently listed on the second board of KLSE in 1996. It was promoted to the main board in 2003. Today, Kossan is among the leading glove manufacturers of the world as it is worth RM 4.37 billion in market capitalization. In this article, I’ll focus on Kossan’s past achievements, their impact on its financial results and provide an update on its future plans. Is Kossan Rubber Industries a good stock to invest in now? Here are the 9 quick things you need to know about Kossan before you invest.

Here, I’ll provide a detailed account of Kossan’s key activities to expand its production capacity over the last 5 years: In 2015, Kossan has recorded RM 202.5 million in shareholders’ earnings, the highest in the 6-year period. This is because the company had benefited from lower raw material costs and favourable foreign exchange rates in 2015. 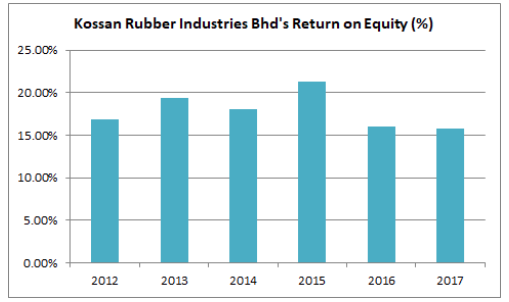 Kossan has grown its cash reserves over the last 5 years. It has increased from RM 47.7 million in 2011 to RM 210.3 million in 2017. Thus, this allows Kossan to have the financial strength to finance its expansion plans, working capital, R&D, and technology to remain relevant and competitive in the industry.

Here are the key highlights of Kossan moving forward:

In 2017, Kossan has the capacity to produce 25.0 billion pieces of gloves per annum.

Plant 17 & Plant 18:
Kossan has commenced its construction of Plant 17 and Plant 18 where both plants are located along Jalan Meru, Klang. The construction of these plants are expected to be completed by 2018 and would increase another 4.5 billion to as much as 29.5 billion pieces of gloves per annum by 2018.

Kossan has plans to build 4 plants on a 56-acre site at Bestari Jaya. Each plant has a production capacity of 4.5 billion gloves per year. Kossan plans to build these plants in 4 phases where each phase consists of the construction of one plant per annum. With a combined capacity of 18.0 billion pieces of gloves, it would gradually increase its total production capacity to 47.5 billion pieces of gloves by year 2023. In August 2017, Kossan has acquired a piece of land at Kuala Langat with the size of 98 acres. It is intended for the future expansion of its glove production capacity over the long-term.

On 4 December 2017, Kossan has acquired 26.97% shareholdings of Cleanera HK Ltd (Cleanera) for US$ 1.6 million or RM 6.5 million. Thus, Kossan raises its stake in Cleanera to 82% shareholdings. This allows Kossan to further tap into the growth in the Cleanroom industry in China in the future.

In April 2018, Kossan has announced its proposal to split 1 existing ordinary shares into 2 ordinary shares. It is intended to improve trading liquidity of its shares as Kossan’s stock price would be more affordable. Barring unforeseen circumstances, the share split would be completed by Q3 2018.

For further enquiries or to request for additional investment information on Kossan’s Investors Relation matters, you may contact:

As at 15 March 2018, the substantial shareholders of Kossan Rubber Industries Bhd and their respective shareholdings are as followed:

Tan Sri Dato’ Lim Kuang Sia is appointed as the CEO of Kossan and is the ultimate shareholder of Kossan with his interests in Kossan Holdings (M) Sdn Bhd.