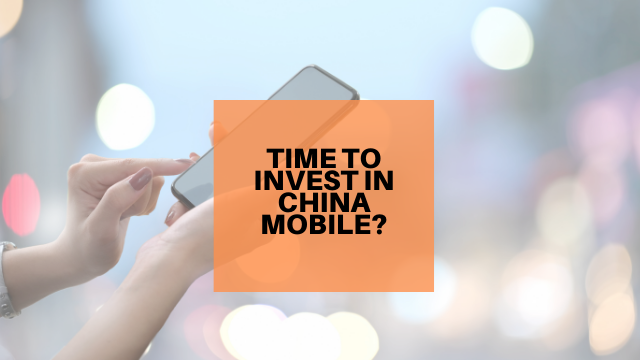 Would this be a good opportunity to buy China Mobile’s shares? Let’s delve deeper.

China Mobile is the largest telecommunication services provider in China. As of end-Sept 2020, it had 946 million customers, one of the largest in the world.

The Business market is the new growth engine that leverages data, information, and communications technology to enable business transformation and upgrade. Revenue from this segment grew 48% in 2019. The new market covers international operations and new initiatives such as digital content and internet finance.

However, there are a few bright spots if we delve deeper into the numbers. Telecommunication services revenue grew by 2.5% to RMB525.7 billion. Almost 114 million customers were on 5G mobile plans, a huge jump compared to 32 million in 1Q 2020.

A glance at China Mobile’s historical financials shows that the company has had a stable revenue trend in the past 5 years. EBITDA had increased over the period, with margin improving from 35.9% in 2015 to 39.7% in 2019. This indicates that China Mobile operations are getting more efficient at churning out higher earnings per unit of revenue.

Operating cash flow has also grown in tandem with revenue, except for 2018 due to the company clearing up a large chunk of accounts payable.

China Mobile’s operational data has also shown good growth over the same period. 4G customers, except for 2019 when the industry was transitioning towards 5G rollout, more than doubled to 713 million in 2018. Wired broadband customers increased from 77 million to 187 million in 2019. Mobile data consumption showed a similar pattern of explosive growth.

It seems clear that China Mobile was able to use its dominant market position to capture new user growth.

As the largest telecommunication services provider in China, China Mobile has a solid foundation bolstered by its 946 million customers. The mobile telecommunication sector is also a defensive industry compared to other consumer sectors such as fast fashion or food and beverage. Customer loyalty is often dependent on costs, network quality, and value-added services, factors that China Mobile, an established player is strong in.

The scale of China Mobile grants it a competitive edge against the smaller players that helps to solidify its economic moat. It could secure financing at a low rate to fund its capital expenditure. Its economies of scale mean it runs more efficient operations. It is also the largest shareholder of China Tower, the dominant communication network and infrastructure company in the country.

China has a low internet penetration rate. 64.5% of China’s population has accessed the internet before as of Mar 2020, compared to 87% of the US  and 91% of Japan according to Statista. With China already in the mobile internet age, the large rural population that has yet gone online are likely to do so via mobile data, presenting a huge addressable market. As the company was able to grow its 4G business tremendously, I would believe that China Mobile is likely to capture the next phase of 5G growth.

I do not see any strong threats that would fundamentally affect the company’s operations and market-leading position in China. However, it is less innovative in various aspects of the digital economy such as fintech, payment, e-commerce, compared to the likes of Tencent, Alibaba, and Huawei. Hence the company is less likely to enjoy explosive growth in the future compared to the internet technology firms.

Price Plunge Due to Delisting – An Opportunity?

As written earlier, China Mobile’s share price suffered a knee-jerk drop after the delisting announcement. At its lowest price of HK$39 on 8 Jan, it was valued at a Price Earnings ratio of around 7 and a yield of  8.3% based on its 2019 dividend of HK$3.25. This was an attractive valuation for a blue-chip stock by any measures.

We have seen from this article that China Mobile is the largest telecommunication company in China, with a steadily rising revenue and earnings. Its 5G mobile plans seem to be gaining traction too, with a growing number of 5G customers, increasing services revenue, and a slowing trend of decrease in ARPU.

The delisting of China Mobile shares from the US does not affect its business and operation fundamentals which take place in China. The impact pertains to the liquidity of shares and market sentiment which can depress the share price in the short term.

However, in the long term, I do not see anything materially different from the company before the delisting announcement.

Hence this becomes a situation where a fundamentally sound company is temporarily impacted by negative market sentiment. If you are attracted by the low valuation and the juicy dividend yield, this could be a good chance to collect some shares.

Spotify – A giant in the making