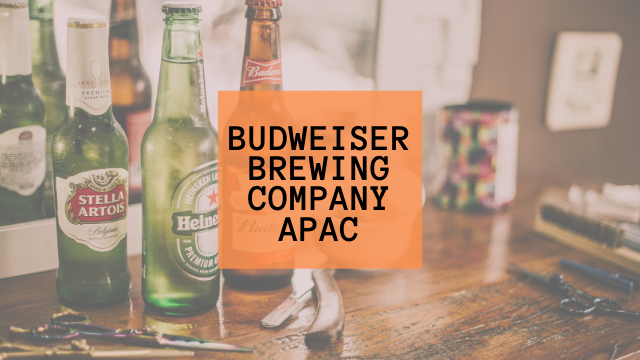 Beer is arguably the most common alcoholic beverage suitable for various occasions, such as weddings, social gatherings, dinner dates etc.

The brewers behind some of the common beer brands are often listed corporations. For example, Thai Beverage listed on SGX produces Chang Beer.

There are more brewers listed in Hong Kong. Budweiser Brewing Company APAC Ltd (HKG: 1876) is one such company.

Bud APAC is the Asia Pacific arm of the world’s largest beer brewer AB InBev Group based in Belgium.

GlobalData, independent market research and consulting company revealed in the IPO prospectus that the group holds leading positions in its key markets.  It is the top player by beer value in China and South Korea, top three positions in India, top three in the fast-growing premium and super-premium categories in Vietnam.

Its portfolio of more than 50 brands features some of the most popular beers in the market. Some examples include:

The group classifies its brands according to prices and types to target consumers at various price points across markets with different maturity. For example, the Budweiser, Stella Artois and Corona cater to affluent drinkers who have a knack for premium, differentiated brands. Becks, Cass, and Harbin target the mass market of India, South Korea, and China with their well-defined localised brew.

Bud APAC suffered a heavy drop in its first-quarter 2020 results, due to social distancing and reduced spending brought about by the Covid-19 outbreak. The total volume consumed fell by 42%, resulting in a revenue drop of 39%.

Operating profit was a measly US$14 million, a 95% drop compared to 2019. In particular, revenue and consumption volume both declined by about 46% in China.

As the pandemic situation in Asia improves, Bud APAC’s business has gradually improved since mid-March. Almost all of China’s wholesalers and breweries have resumed operations in China, with the government giving out e-coupons to encourage consumer spending. South Korea shows a similar trend of increased consumption too.

I have only managed to find Bud APAC’s earnings as far back as three years ago. Overall, the group’s revenue grew just 3.6% per year, while its profit dropped in 2019 even though it is substantially higher than in 2017.

This seems to suggest that the group is operating in mature markets and its cost management measures are bearing fruit, resulting in higher profit.

On a positive note, the group has been generating healthy cash flow from operating activities which ranged from US$1.3 billion to US$1.7 billion over the same period.

The group also has a strong balance sheet. As of Dec 2019, it had US$950 million of cash and less than US$180 million of interest-bearing loans.

Asia Pacific has a much lower aggregated per capita consumption of 20 litres compared to other similar markets such as the US (71 litres), Brazil (60 litres), and Mexico (74 litres).

Beer consumption across the Asia Pacific is showing a trend of premiumisation and trading-up. As countries develop resulting in rising disposable income, the mass market consumers seek more premium brands as their lifestyle evolves.

China is the world’s single-largest beer country, with 25% of the global volume consumed. It shows a similar trend of consumers seeking out better quality beers and more frequent drinking at casual occasions such as at-home or social gatherings. This bodes well for the group as it has the largest market share by volume in the premium and super-premium category.

South Korea, another of its key market, has some favourable trends as well. Consumers are increasingly drinking imported brands for tastes not offered by conventional local brewed beer. People are also shifting away from drinking Soju. The group is the largest brewer here with a 60% market share in 2018, thus positioning them well to benefit from the increased consumption.

Bud APAC key strength, in my opinion, is its strong brand equity that seems set to grow with premiumisation in Asia. Budweiser and Stella Artois have a very strong brand value that has clinched key awards as shared earlier. They have strong consumer mindshare, so much so that a non-beer drinker like me would label them as upscale, smooth brew usually consumed at posh nightspots.

Its status as the largest beer company in the Asia Pacific also grants it some strong moats such as access to cheaper credit, superior distribution capabilities, and sales force, and flexibility to adjust its pricing strategies across different brands to respond to market changes.

The group is also keeping up with times by leveraging innovative trade programmes and digital platforms to boost sales. For example, it launched an online Electronic Dance Music live-streaming platform with Tmall where Chinese consumers can enjoy performances by DJs while ordering beer online. Harbin beer partnered with e-sports influencers to host live-streaming events that encourage people to order beer on JD.com while enjoying exciting content.

Bud APAC faces keen competition from strong brands such as Snow (China), Hite (South Korea), Kingfisher (India), Sabeco (Vietnam). These are equally strong players which compete fiercely for market share. Furthermore, there could also be a shift towards other prominent alternative beverages such as spirits, wine, and Baijiu.

The group also needs to navigate different regulations in its key markets. Changes to the laws, particularly alcohol taxations, food operation licensing, or beer marketing activities will impact the group’s business, and result in additional costs in adhering to these regulations.

Bud APAC has the largest market capitalisation among the three companies. This probably brings about a price-earnings-ratio of 42 times that is above the industry average. Its Price-to-book value and dividend yield appear in-line with the industry trend.

I like this company for its scale, portfolio of strong brands, and dominant positions in its key markets.

However, the beer industry is very competitive. Consumers are spoilt for choice from the type of beverages and the brands available. Although the market is still expanding due to growing economies and rising disposable income, the growth is likely to be slow.

For Bud APAC’s shares to do well, it has to show a superior earnings growth rate above its competitors, coupled with an increase in market share.

Hence, this company would remain on my watch list for now.