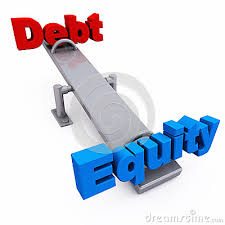 What is Negative Shareholders Equity?

First of all, Equity = Assets – Liabilities

Negative equity on the balance sheet simply refers to the fact that the Company owed their creditors in excess of what they owned at that point in time – basically it means that they were “broke”.

When shareholders equity crosses over into negative territory, it means that said company had incurred losses that completely cancelled out their total share issuance proceeds as well as any accumulated earnings since the company’s dawn of time.

When the balance sheet shows a negative balance of shareholders equity, it’s a typical red flag especially for a credit analyst as it simply means that the company at this point in time isn’t capable of fulfilling all of its obligations. It could be a potential indicator of impending bankruptcy.

From the perspective of an asset orientated valuation, by investing in a company with negative shareholders equity, an individual is essentially paying money to own something that has bitten off more they could chew and it might end up to akin to a value-destroying exercise. Theoretically, one wouldn’t have to put in any capital and would even receive capital to set up an identical company.

A famous example was General Motors Company (NYSE:GM) eventual Chapter 11 reorganisation exercise in 2009 when the signs were evident prior to the occurrence.

But this is by far not a death sentence; as long as the company can still tap into the debt and/or equity markets to raise capital to tide them over such a period, they could turn the ship around.

A local example would be Charisma Energy Services Ltd (SGX: 5QT). When they were formerly known as YHM Group (Prior to that, they were known as China Enersave), the company had both a negative equity and negative shareholders’ equity during the period ending Jun 30, 2012. But through a series of capital raising exercises involving convertible loan agreements, issuance of subscription shares, convertible perpetual capital securities and warrants, Charisma Energy is back in the black from a balance sheet standpoint.

What Leads To Negative Shareholder Equity?

There are three main reasons:

1)    Over the long run the company had simply, made a lot of losses

2)    The company over-leveraged, racking up a huge load of debt

When a company that losses money starts to borrow to stay afloat, it leads to a vicious cycle. In the worst case scenario, this would saddle the company to service interest payments at increasing rates that just delivers bankruptcy to them on a silver platter.

Like any investment, the balance sheet only tells one side of the story and an investor would be prudent to explore all avenues before making an investment. With that being said, negative shareholders equity would be considered as quite a red flag in a value investor’s check-list!