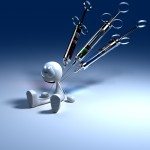 The story is simple. A country of 1 billion people, getting wealthier at an extremely rapid rate. As standard of living grows, the population would demand better food, better products, better public infrastructure and better housing. But most importantly, there will be better healthcare.

The history of many domestic medical companies is one of great growth. In this article, we look into one company in particular; Shandong Weigao Group Medical Polymer Co. (HKG:1066). The company is a medical device supplier, focusing in single-use medical devices such as consumables, orthopedic materials and blood purification consumables and equipment. The company operates out from Weihai, Shandong, in its main production facilities.

The company is also in a net cash position, indicating that it does not require huge investment to grow its business. The company has some stone cornerstone investor, mainly Medtronic Inc (NYSE:MDT) which owns 7.2% of the company. Weigao also operates a joint venture with Medtronic in China for the sale and distribution of orthopedic medical devices.

Yet, there are some issue the company faces in the past. It has invested a 21.5% stake in Biosensors International Group Ltd (SGX:B20), a major heart stent producer in the region, listed in Singapore. However, the investment did not end well for Weigao, resulting in a markdown of about RMB 500 million back in 2013, which is more than half of the company net income.

Weigao Group is definitely a fast grower in the country. However, as seen from its investment in Biosensors International, the growth might not be smooth sailing forever. Furthermore, with the crackdown in corruption in the medical sector in China, it is unclear if it would affect the company’s performance going forward. For now, this is one company investors should keep a lookout for.