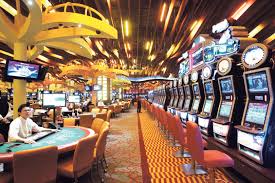 The Genting Group had started its humble beginnings since 1965. Founded by the late Tan Sri Lim Goh Tong, the self-proclaimed astute “Chinaman Businessman” was ahead of many during his time in several ways. Having developed and built an integrated resort in Genting Highlands in 2003 was one of the key milestones of the Group. The chairmanship of the Genting Group has been handed down to his son, Tan Sri Lim Kok Thay.

For more than 25 years, Genting Singapore plc (SGX: G13) and its subsidiaries have been at the forefront of the gaming and integrated resort development globally which has presence in  Australia, the Bahamas, the Philippines and the UK. Its principal business activity was the operations of Resorts World Sentosa, opened in the beginning of 2010. The 49 ha resort includes South-East Asia’s first Universal Studios theme park, the Resorts World Casino which comprises 15,000 sqm of net gaming space, the Marine Life Park, hotels and a wide variety of food & beverage outlets. With its flagship project, Genting Singapore generates close to S$3 billion in revenue annually and with an average net profit margin of 26% since FY2010. Its relatively high net profit margin allows the Group to generate a return of 10-18% on shareholders’ equity between FY2011 to FY2013.

Genting Singapore operates in an industry with a high barriers to entry. Development of such integrated resorts require a huge capital outlay in order to operate the business. Genting Singapore has an annual depreciation charge of around S$330 million on average, representing an average of >10% of total revenues. Moreover, the Group spends approximately S$900 million annually over the past 4 years in order to maintain and grow its business. Such huge sum of capital might deter any new entrants who wish to enter the gaming industry.

In addition, gaming is a highly regulated industry in Singapore where entrants are required to get approval from the Casino Regulatory Authority (CRA) which is supervised by the Ministry of Home Affairs in order to operate the gaming business. So far, the CRA has awarded 2 casino licenses, one of which was awarded to Resorts World Sentosa. This further limits the competition in the Singapore market.

Of course, the gaming industry is not just restricted within the lion city given the convenience of air travel these days but also competes regionally within Asia Pacific. Such countries include Macau, Malaysia, the Philippines, Australia and New Zealand as well as cruise ships in Asia which offer gaming services. The industry remains highly competitive amongst existing players who compete regionally.

With a total asset of around S$13 billion, Genting Singapore remains a force to be reckon with within the gaming industry.