Malaysia Finance Minister Lim Guan Eng (LGE) is spearheading an effort to clean up our nation’s balance sheet. His efforts have resulted in a series of deferments and cancellations of several mega-infrastructure projects nationwide. As I write, it is clear that LGE would continue on Malaysia’s austerity drive in the future.

It is unwelcoming news for local construction firms. Billion-Ringgit firms which include Gamuda, Sunway Construction, George Kent … etc had experienced a sharp drop in their stock prices with expectations of fewer contract tendering opportunities for infrastructure projects in the future.

Here is a question. Is it possible to find winners in the construction sector?

First, it is important to note that the construction industry is cyclical by nature. Hence, to me, it is not a question of whether the industry would recover in the future, but when. In this bad times, it is easier to spot which construction firms are afloat and which would sink.

Here, I’ll share my views on how to assess construction stocks from scratch and determine whether it would swim or sink in this tough times. I will use Econpile Holdings Bhd (Econpile) as a case study and thus, here are 5 things you need to know about Econpile before you invest.

Founded in 1987, Econpile is a piling and foundation specialist in Malaysia.

It provides local infrastructure concessionaires and property developers a wide range of services which include earth retaining systems, earthworks, basement construction and substructure works. Presently, it holds a Grade 7 License from the Construction Industry Development Board (CIDB) of Malaysia and hence, is allowed to tender for projects of unlimited values in the country.

The Cheng Eng and Pang Sar are substantial shareholders of Econpile with their direct shareholdings amounting to 27.25% and 21.83% of the company.

The Cheng Eng founded Econpile in 1987 and remains at the helm of leadership of the company as its Group Managing Director. His daughter, The Kun Ann sits in the board as its Executive Director. Meanwhile, Pang Sar is now appointed as the Group Chief Executive Officer (CEO) of the company.

As such, I learned that the directors’ interests are more aligned to shareholders as there are three directors out of six who have substantial stakes in the company (inclusive of The Kun Ann). 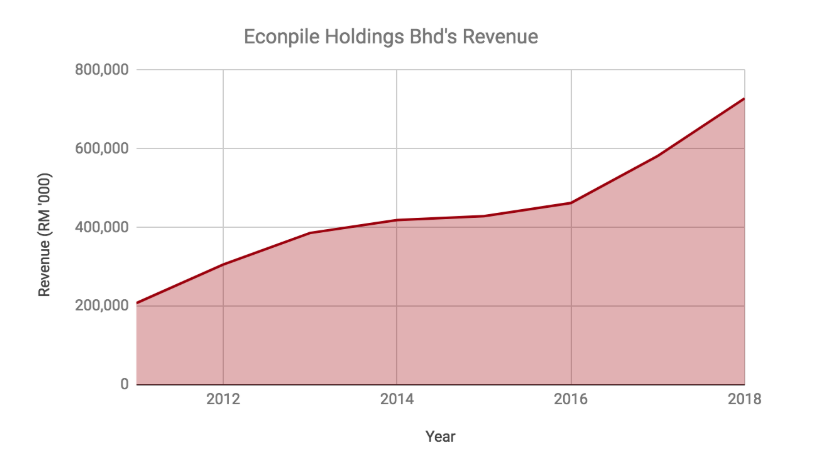 As at 30 June 2018, Econpile has non-current liabilities of RM 27.9 million and thus, has a gearing ratio of 7.54%. It has a current ratio of 2.09 where as much as 94.5% of its current assets are made up of trade and other receivables (TR). Three customers accounted for 49.4% of Econpile’s total TR and thus, possesses a concentration of credit risk. In other words, if one of these customers choose to delay or to default their payments, it would negatively impact the financial strength of Econpile in the future.

As at 30 June 2018, Econpile has 15 ongoing projects at various stages worth a total of RM 1.1 billion in order book. Most of these projects would continue to contribute earnings to Econpile in the financial year (FY) 2019. To name a few, the main contracts include:

Frankly, an investment in Econpile has both merits and demerits. Here, I make a list of both: