Golden Agri-Resources Limited (“Golden Agri”) is a leading Indonesian plantation group with integrated operations for palm oil-based products. Listed on the Singapore Exchange in 1999, Golden Agri is one of the pillars of the Sinar Mas Group, one of the largest conglomerates in Indonesia.

Now, what do palm oil-based products cover? Well, we are glad you asked.

Once we stop and take a look, palm oil is everywhere in our lives, from:

In recent years, palm oil is increasingly being used as feedstock for biofuel. With that said, its primary use remains for food.

Why is Palm Oil the most consumed vegetable oil?

In 2012, 52.1 million tonnes of palm oil was consumed. This translated to 28% of the world’s consumption of the 17 major oils & fats. The success of palm oil could be attributed to its versatility, with the palm oil-based products used throughout the world for many food and non-food products (see earlier).

Oil palm also has a higher yield as compared to soybeans, rapeseed and sunflower seed = more vegetable oil produced per hectare relative to those other vegetable oils.

Another important advantage would be palm oil’s comparatively attractive pricing relative to the other vegetable oils.

Golden Agri’s business is commodities, if we were to oversimplify, it would be – 1) Palm Oil, and & 2) Oilseeds & Others.

Some of you might ask, “Hey, what is an integrated player?”

Here is a quick primer on the basis of Upstream Oil Palm operations:

The optimal region for oil palm cultivation lies within 10° latitude north and south of the equator. Thus, it should not be too much of a surprise that Indonesia and Malaysia are the largest producers of palm oil, and accounted for about 85% of the world’s production of palm.

Oil palms trees typically start to produce fresh fruit bunches (“FFB”) or fruits, 3 years after planting and have an economic lifecycle of ~25 years. As perennial crops, oil palm trees have rather resilient qualities and are generally less affected by adverse weather conditions.

Now for the Downstream:

CPO would then be delivered to refining plants to be refined, bleached and deodorized (RBD).

Further processing would lead to use in food applications from ice cream to chocolates. Processing of RBD palm oil would also result in Oleochemicals, contributing towards biodiesel production.

Golden Agri strategically located this segment in China to capitalise on China’s position as the largest consumer of vegetable oils.

However, compared to Golden Agri’s palm oil based business, its oilseeds & others segment are relatively small, making up about 10% of FY2016 revenue and only 2% of EBITDA.

Whenever a company is in a business linked to a commodity, having scale and being an efficient, low-cost producer are keys. And Golden Agri definitely has the scale to boot. 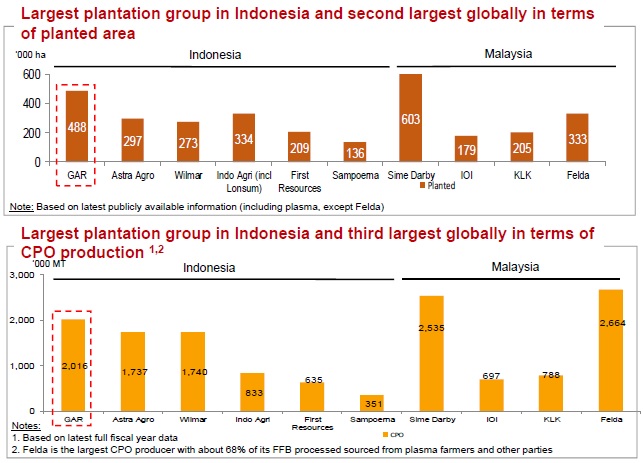 Next to Sime Darby, Golden Agri with a planted area of 488,276 hectares (including plasma plantings) is the second largest player in the palm oil industry. Note: Golden Agri is the largest upstream player in Indonesia.

To place things in perspective, Singapore has an area of 719 km square = 71,900 hectares. In other words, Golden Agri’s planted area is the size of close to 7x Singapore!

Presently, Golden Agri has planted area in Indonesia – in Sumatra, Kalimantan & Papua. To sustain long-term growth, Golden Agri has also looked beyond Southeast Asia, and are invested in Africa through the Verdant Fund LP, a private equity fund that owns Golden Veroleum (Liberia) Inc (“GVC”). The Liberian government has granted GVL a concession for the evelopment of oil palm plantations in Liberia.

Sinar Mas Group is a brand of companies with 6 business units, with Golden Agri as one of the pillars – the pillar which Sinar Mas operates its agribusiness and food operations through.

As part of one of Indonesia’s largest conglomerates, Golden Agri could potentially benefit from the services and knowledge from the entire group. And no matter which part of the world you are in, in our opinion, this is definitely something valuable.

Note: For an appreciation of some of the entities they deal with, you may look towards the “Interested Person Transactions Disclosure” under Report of the Directors Note 6 of Golden Agri Annual Report 2016.

Additionally, these seedlings also have an earlier expected time to harvest of 24 months, compared to the current industry average of about 30 months.

However, it might take a couple of years before Golden Agri is able to cultivate a sufficient quantity of these planting material to plant over a larger commercial area in 2022.

No matter how you slice it, Golden Agri is linked to the Oil Palm business, and with palm oil based operations making up 88% of Golden Agri’s FY2016 Revenue, it should not be too surprising if we were to say that the company’s performance is rather sensitive to CPO prices. Additionally, the cyclicality of a business could also show up in the financials (hint: the net profit line).

For a quick breakdown, over a 25Y economic lifecycle, these are the general classifications for an oil palm:

And as at 31 Mar 2017, at an average age of 16Y (including plasma), Golden Agri with 47% of its plantings above the age of 18Y might require a sizable capital outlay in coming years. With total Equity of USD4.1 billion this translated to a gearing ratio (net debt/equity) of 66%.

On the other hand, as long as the company has the ability to access capital required, then, that’s that.