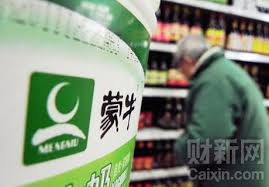 Despite the Chinese milk scandal of 2008, China’s growing market for dairy products continue to benefit dairy producers such as China Mengniu Company (HKSE: 2319) and Yili Group, two of the largest national player.

China Mengniu Dairy Company is one of mainland’s dairy product manufacturers. The Group produces mainly liquid milk products (such as UHT milk, milk beverages and yogurt), ice cream, milk formula and other dairy products including cheese. The Group’s revenue continued to grow steadily from RMB24 billion in end-2008 to RMB43.4 billion in end-2013, implying a 12.6% CAGR.

China Mengniu is set for controlling the dairy products market. In May 2013, China Mengniu became the  largest shareholder in China Modern Dairy Holdings (HKSE: 1117) with a 28% stake. China Modern Dairy Holdings is the largest raw milk producer in the domestic market with a total sales volume of 373,000 tons produced by its 22 farms as at end-2013. In addition, China Mengniu has also partnered with Danone Group (BN.PA) for a Joint Venture (JV) to manufacture and sell premium chilled dairy products including yogurt. Given Danone Group’s expertise in chilled dairy production, China Mengniu can further tap the huge potential of China’s yogurt market. As at Feb 2014, Danone Group has held a 9.9% stake in China Mengniu. In order to capture the growth in the milk formula market, China Mengniu also acquired Yashili Group (HKSE: 1230) as a controlling shareholder (76.58% as at Nov 2013) for roughly RMB9 billion to establish an infant milk formula platform.