Listed in 1987, CIMB Group Holdings Bhd (CIMB Group) is the fifth largest banking group in Southeast Asia. It operates from over 851 branches that are located across 15 nations, including all 10 countries in the ASEAN region. As I write, CIMB Group is valued at RM 62.2 billion in market capitalization. In this article, I’ll list down 8 things that you need to know about CIMB Group before you invest.

Here are the key highlights of CIMB Group’s financial results:

CIMB Group has reported consistent growth in operating revenue in the last 10 years. It increased from RM 7.74 billion in 2008 to RM 17.63 billion in 2017. This is due to continuous growth in net-interest income, profits from Islamic bank, and fee and commission based income during the period.

CIMB Group’s shareholders’ earnings had increased from RM 1.95 billion in 2008 to RM 4.54 billion in 2013. This was in line with its growth in operating revenue during the period. However, CIMB Group has recorded significantly higher loan loss provisions from CIMB Thai, CIMB Niaga and its operations in Singapore from 2014 to 2017. 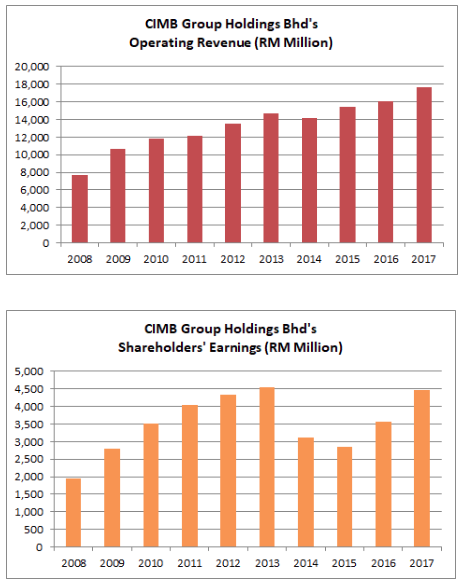 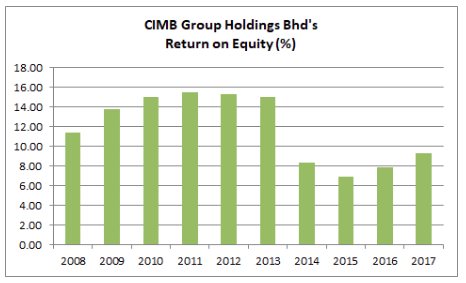 As at 31 December 2017, CIMB Group has reported to have total capital ratio (TCR) of 16.5%. It is above the current requirement of 9.25%, which consists of a minimum requirement of 8.00% and an additional buffer of 1.25% set by Bank Negara Malaysia under the Basel III capital standards for 2017. It shows that CIMB Group is well-capitalized to pursue future business growth and as well as to meet adverse economic conditions in the future.

Here are the key highlights of CIMB Group moving forward:

CIMB Group has set the following targets to be achieved in 2018:

CIMB Group has forged several meaningful partnerships in China for 2017 which includes:

In November 2017, CIMB Group received the approval from the Monetary Board of the Bangko Sentral ng Pilipinas (BSP) to establish a bank branch in the Philippines. The retail branch is expected to be operational in Q4 2018.

In 2017, CIMB Group has launched CIMB Fintech to drive innovation and to chart the group’s digital roadmap over the long-term. It would focus on areas such as cybersecurity, artificial intelligence (AI), Robo Advisor, Blockchain, and much more. In 2018, CIMB Group expects to have a market launch of its digital bank in Vietnam. It would work on similar propositions in some of its other markets, which includes the Philippines.

Although many investors are worried about the impact on CIMB Group with regards to the new government, we are not that worried about its prospect. CIMB Group is similar to any other government-linked companies and should continue to play a major role in the economy for all stakeholders.

For further enquiries or to request for additional investment information on CIMB Group Holdings Bhd’s Investors Relation matters, you may contact:

As at 28 February 2018, the substantial shareholders of CIMB Group Holdings Bhd and their respective shareholdings are as followed: