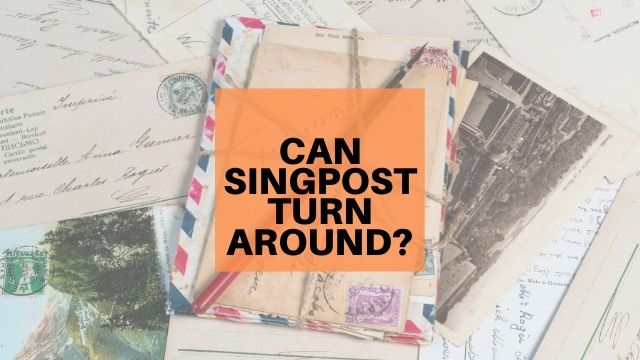 A clerk, a writer and a farmworker.

That’s how Singapore Post Limited (SGX:S08) got started in the early 1830s.

Its distribution network is extensive.

It currently has 300 “SAM kiosks” to pay your bills and buy postage conveniently, 56 post offices, over 700 post boxes and 11,000 POPStation lockers across 160 locations in the country.

And it still mails up to 3 million mail items daily.

Once a dominator of the letter business, SingPost’s share price has plunged 67% to one of the lowest levels. It dropped from SGD2.15 per share in 2015 to around SGD0.70 per share.

It’s only a few years ago that the company was starting to struggle.

The troubles at SingPost — and the poor performance of its stock — suggest a structural change in its business and its industry.

And it’s beginning to weigh on the company’s business model.

You see, from our previous write-up about the business, SingPost is getting disrupted by the “new economy”. While you still collect your letters in the mailbox, lesser and lesser people are sending out letters.

The question here is — can SingPost make a comeback?

Let’s quickly check out what’s SingPost up to recently.

SingPost has three core business segments, and they all cater to operations in Singapore and Australia.

Its Post and Parcel segment saw a modest 5% sales growth to SGD392 million, largely due to a rise in ecommerce volume growth. And SingPost has pioneered new initiatives — such as the new “tracked letter” product which gained traction amongst its customers.

But this was dragged down by a lower letters & printed papers business.

Here’s the thing. There’s lower volumes of letters due to digital substitution, and also higher costs faced in the health and safety arrangements for the pandemic outbreak. This also includes providing temporary housing to some of its foreign workers.

In its international Post and Parcel business, e-commerce volume was largely resilient. But this was pulled down by a major disruption in global air freight out of Changi Airport, with a drop in 96% in passenger fleet movement during the pandemic crisis.

Its operating profits saw a decline of 67% to SGD22.7 million in its Post and Parcel segment. This is really due to the major disruption in global air freight during the pandemic crisis.

Because of its move to ride the e-commerce wave, SingPost saw a turnaround in its Logistics segment.

1HFY20/21 sales grew from 20% to SGD293 million, compared to a year ago. And it’s all from its increased adoption in ecommerce in Asia. And its product segments — CouriersPlease, Quantium Solutions and SP eCommerce experience huge growth from the increased adoption of e-commerce activities in Asia.

As a result, CouriersPlease saw a rise in volume growth in Australia, with local sales rising 48% for the financial period.

So far, SingPost’s Logistics segment It made a SGD5.7 million operating profit, from a loss of SGD3.5 million compared to a year ago.

Now, Logistics is where SingPost provides warehousing, fulfillment and physical delivery of stuff you buy or sell online. If you think about it, with huge online shopping platforms gaining massive popularity, this is, in my opinion a bright spot, for SingPost.

SingPost can take advantage of its well-established delivery network, transport infrastructure and order fulfillment system to cater to the growing demands of ecommerce.

It owns its SingPost Centre retail mall and office, where it manages its commercial and self-storage operations.

But one key concern here is, SingPost still needs to manage costs. During 1HFY20/21, its net earnings fell 30% to SGD31.5 million, compared to a year ago. Much of it was due to higher operating costs. It also had to impair some of its unprofitable US business, which it already started to exit.

While it still generates a steady flow of free cash flow, the company is conserving its war-chest to make new acquisitions to transform its business. That’s why, its dividends payout has started to decline as a result.

This also comes at a time when SingPost’s Chairman, Simon Israel, is transforming the company. And he says: “The Future of Post initiative will spark the most comprehensive rejuvenation of Singapore’s postal system in decades and strengthen our position as a global leader in the last-mile space. The first component of this project, the world’s first Smart Letterbox, will commence public trials within the year…”

Now Future of Post is an interesting concept. And SingPost has launched many initiatives on thi, including its Smart Urban Logistics initiative — where it aims to transform Singapore’s mail delivery system to drive long-term business performance.

This includes a smart letterbox delivery system prototype, where there’s “push notification” through an app, larger containers to hold e-commerce items and a keyless access system for mail collection.

It seems SingPost is doing all it can to transform a once, dominant letter business around. While there are bright spots in the company’s growth potential, SingPost still faces many challenges in the road ahead. Its exit in its US business, managing higher operating costs and adapting to the new digital economy. SingPost has to move fast, yet be wary of the ever changing e-commerce and logistics environment.

While the huge share plunge may seem to offer a short-term trading opportunity, but for longer-term income investors who wish to build a long-lasting retirement portfolio, perhaps I’d look away from SingPost for now.