Mi Technovation Berhad (formerly known as Mi Equipment Holdings Berhad) (“MI”) (KLSE:MI) is principally involved in the design, development, manufacture and sale of wafer level chip scale packaging (WLCSP) sorting machines with inspection and testing capabilities for the semiconductor industry. In addition, the group is also involved in the provision of maintenance services and technical support for its machines as well as the sale of related spare parts and components.  In this article, we will take a closer look at MI’s business profile, management, and financials, to assess whether the company is suitable for an investment.

WLCSP is an advanced form of packaging an integrated circuit (IC) at the wafer level, resulting in the smallest possible package size that is equivalent to that of the die itself. This contrasts with the conventional form of packaging whereby the IC is packaged only after the wafer is sliced into individual dies. WLCSP sorting machines are used in the final stage of packaging to perform tape-and-reel – the process of picking and placing dies from a wafer onto a plastic carrier tape which is then wound on a rigid plastic reel.

MI’s machines are mainly exported. Below is the breakdown of revenue by geography, whereby the largest segment comes from Northeast Asia, comprising 73.2% and 82.0% of total revenue in 2018 and 2019 respectively.

Barriers to entry are high in this industry, and once an equipment manufacturer passes the numerous rounds of qualification and rigorous final testing, it usually becomes part of the “Approved Vendor List” for a customer. This not only makes the business relationship a “sticky” one but also one where the working relationship is two-way and co-development becomes essential. Ultimately, most equipment vendors will become either the preferred source or dual-source at best, to accelerate new product development while limiting the risk of intellectual property loss.

MI regards itself as a technology group and being at the technological forefront is the cornerstone of its success. With its agenda to further improve its new equipment series in 2020, the group has re-allocated RM45.0 million from IPO proceeds to be deployed towards building engineering centres in Taiwan, China and Korea. These centres will enable the group to keep abreast with evolving technology trends and give it direct exposure to top technology players as well as access to a deeper pool of talents to develop its products and know-how. These overseas engineering centres are tasked to undertake the development of the group’s new series under the semiconductor equipment business unit.

The beneficiary of growing demand for WLCSP

In the foreseeable term, the semiconductor industry is expected to continue growing against the backdrop of trends such as connected cars, Internet of Things, Industry 4.0 and next-generation wireless communication technologies (5G). Particularly for WLCSP, demand is expected to be driven by 1) the increase in demand for mobile and wireless devices where form factor is key and 2) the entry of advanced versions of mobile and wireless devices prompting upgrades especially for consumer products. Above all, semiconductor equipment manufacturers, including that of WLCSP sorting machines, will stand to benefit from the growing demand for semiconductors.

The group is led by Executive Director and Group Chief Executive Office Oh Kuang Eng who is also the largest shareholder with a 68.8% equity stake. He possesses over 20 years of experience in the semiconductor industry with in-depth knowledge in semiconductor automated equipment and process development. He is a graduate of the University of Malaya, with a Bachelor of Engineering (Honours Class 1 Mechanical).

In his current role, he is responsible for the group’s business direction and strategies as well as management of the business and product development. Under his leadership, he expanded the group’s business into South East Asia (Singapore, Philippines and Thailand), North-East Asia (China, South Korea and Taiwan) and North Atlantic (Germany, Mexico and the USA).

Some points to note:

MI expects 2020 to be a challenging year. The intermission and pause created by the pandemic and trade war have allowed the group to position itself and build the necessary infrastructure to capture the demand upswing which could be a sharp rebound post-pandemic. With both factories now completed, and its technology centres in Malaysia, Korea and Taiwan operational, the group believes it is ready to capture the upswing in the market. 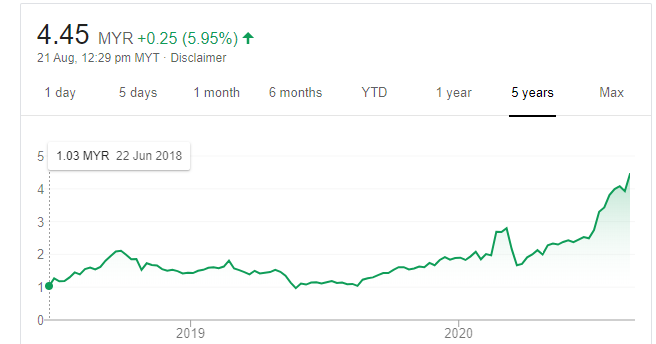