Thus, in this article, I’ll cover Kawan Food Bhd’s past achievements, current financial performances and provide an update on its latest developments in the future. They would be helpful to determine the cause of its drop in stock prices and to ascertain whether Kawan Food Bhd’s shares are truly a bargain or otherwise.

Here are the 8 major things that you need to know about Kawan Food before you invest.

Kawan Food Bhd produces a wide range of frozen local food products which include parathas, spring roll pastries, and chapatis from three factories where two of them are located in Shah Alam, Malaysia and the other one is situated in Nantong, China. In total, its manufacturing activities span across as much as 74,791 sq. m.  in a built-up area.

Kawan Food Bhd derives RM 76.3 million or 38.9% of its sales from domestic customers in 2017. The remaining 61.1% of sales were generated from exports to key markets such as: In 2015, Kawan Food Bhd started the construction of its new state-of-the-art manufacturing factory in Pulau Indah, Klang. It is equipped with brand new modern facilities such as the Automated Storage & Retrieval System (ASRS) and innovative green technology to conserve water and energy consumption.

As of 31 March 2018, Kawan Food Bhd has completed the construction of its factory. The facility is now being commissioned and would be operational by July 2018. Concurrently, Kawan Food Bhd is developing new products which are to be manufactured in this new factory. The factory, which costs RM 150 million, has a total built-up area of 63,080 sq. m. and would be expanding its total production capacity of food products once it is fully operational.

Despite its long-term success, Kawan Food had recorded a drop in quarterly earnings over the last 3 quarters. 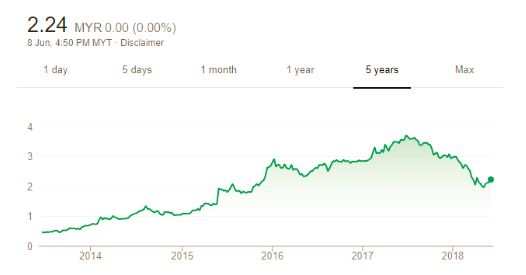 For further enquiries or to request for additional investment information on Kawan Food Bhd’s Investors Relation matters, you may contact:

As at 30 March 2018, Kawan Food Bhd’s major shareholders and their direct shareholdings are as followed:

Nareshchandra Gordhandas Nagrecha (NGN) is a substantial shareholder of Kawan Food Bhd via his interest in Narvee Foundation. NGN is appointed as a non-independent non-executive director of the company.