Skip to content
HomeCase Study8 Things you need to know about Keppel Corporation Ltd. Before  Investing

Keppel Corporation is one of Singapore’s biggest and most diversified conglomerates. Starting  out as a small ship repair yard in 1968, the company has now diversified into the Utilities,  Property, Telecom, and Asset Management industries.

In one way or another, Keppel has a presence in around 23 countries and in FY2021-22 made  revenues of more than SGD8.6 billion.

As one of the country’s largest conglomerates, Keppel is involved in a variety of businesses that  play a part in not just Singapore’s economy, but also the economies of other countries.

The company groups its business into 4 segments: Energy & Environment, Urban Development,  Connectivity, and Asset Management. Let’s look into each of these:

1. Energy and Environment – Keppel builds offshore platforms for oil drilling, production  units, and builds and repairs specialised ships. Keppel is also involved in energy  infrastructure, as it operates a 1,300-megawatt gas-fired combined cycle power plant on  Jurong Island. Aside from this, they also develop, own and operate power plants in  Brazil, China, the Philippines and Nicaragua. Finally, they are also involved in renewable  energy wind and solar projects, from funding to operation.

3. Connectivity – through Keppel T&T, the company is also a leading service provider in  the Asia-Pacific region and Europe with businesses in data centres and subsea cable  systems. Keppel’s Data Centre division has a track record in owning, developing and  managing carrier-neutral data centre facilities that support essential computer systems.

For subsea cable systems, Keppel recently entered into a joint venture with Facebook  and Indonesian carrier services and investment company Telin to build the Bifrost Cable  System, the world’s first subsea cable system that directly connects Singapore to the  west coast of North America via Indonesia through the Java Sea and Celebes Sea.

Keppel also effectively owns 84% of digital network operator M1, which provides mobile,  fixed line and fibre offerings to over 2 million customers. M1 was the first operator in  Singapore to offer nationwide 4G service, as well as high-speed fixed broadband, fixed  voice and other services on the Next Generation Nationwide Broadband Network. M1  was also awarded a licence to operate a 5G network in Singapore, which it is currently in  the process of rolling out around the country.

4. Asset Management – The company is also involved in asset management, with assets  under management of S$42 billion as at end-December 2021. They have several  products that center around real estate, infrastructure, data centres, and alternative  assets.

They offer products such as REITS for both retail investors and institutional investors. 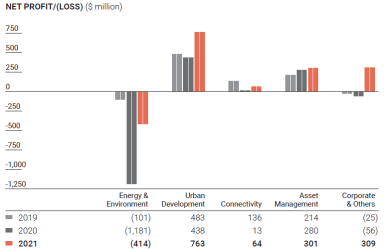 Asset monetisation could lead to more cash or acquisitions

Keppel’s CEO, Loh Chin Hua, announced in September of 2020 that the company  identified around $17.5B of assets that could divest, which equates to around $9.9 per  share in total. Over the next 3 years, the company plans to monetise $3-5B of these  assets, and as of the FY2021-22 period, Keppel has monetised around $2.9B worth of  assets and many more deals in the works. Management has also announced the  company has a goal of monetizing $5 billion in assets by the end of 2023. This  programme of liquidating many of their assets gives Keppel a lot of cash to reinvest into  their business at reasonably high returns, or they can pay this cash back to shareholders  in the form of dividends or share buybacks. Regardless of which option the company  chooses, this can present a huge opportunity for shareholders.

Fibre and 5G Rollout in SG

Keppel’s telco subsidiary, M1, is currently rolling out 5G connections throughout the  country. In FY2021-22, M1 unloaded around $580M in assets, and there is no denying  that the proceeds from this would help fund their 5G expansion. Relating to fibre, M1 had  a total of 2.2 million customers as of end of the fiscal year, 235,000 of whom were fibre  customers. Although this is only a 3% growth from the previous year, the improvement of  the quality of M1’s service over the foreseeable future will likely prove to be a tailwind for  Keppel.

While Keppel’s O&M business has had a great FY2021-22, it may once again see a  downturn if oil prices decrease, although this is not likely to happen any time soon due to  various energy shortages going on around the world. As far as their construction  activities go, the company currently has a net order book of $5.1B, but the depression of  oil prices still presents itself as a risk.

Though the company’s cash position will improve due to the asset monetization  programme, there is a risk that management may not use the proceeds either for  rewarding shareholders, reinvesting in the business in order to grow it, or making an  acquisition that would benefit the business in the long term; but possibly use at least  some of the cash to make an acquisition that would not be beneficial and instead end up  hurting shareholder value.

As of July 29th, 2022, Keppel Corporation is trading at a trailing PE of about 10.2x and is at a  4.7% dividend yield, and according to Morningstar, has been trading at a 5-year average PE of  24.28x, meaning it’s cheaper than it has historically been.

Ryle is a third year college student at San Beda College Alabang. He started investing in early 2018 after discovering the ways of value investing. Since then, he has been outperforming his home market of the Philippines and has recently started applying a value investing strategy to the Australian market; also looking for fundamentally strong stocks and to buy at good prices. After finishing school, he seeks to be a life-long learner and focus his career on Asian stocks because he believes that going forward, there would be better opportunities in Asian markets than in Western markets. His favorite investors are Cheah Cheng Hye from the Value Partners Group, Jean-Marie Eveillard from First Eagle Funds, and Richard Lawrence Jr. from Overlook Investments. Ryle can be reached through this website, his LinkedIn profile, or his email address at rylemungcal@gmail.com.