Sunway Real Estate Investment Trust is presently the second largest REIT listed on Bursa Malaysia. Initiated with 8 properties, Sunway REIT has gradually enlarged its portfolio to 15 investment properties worth RM 6.69 billion as at 30 June 2017. In this article, I’ll share 8 quick facts that you need to know about Sunway Reit before you invest.

Sunway Reit derives income from a diverse portfolio consisting of:

Sunway Real Estate Investment Trust has reported growth in gross revenues, net property income, and income available for distribution over the last 5 years. The growth was attributed to Sunway Reit’s continuous efforts in expanding its portfolio and undertaking asset enhancement initiatives during the period. As a result, this has contributed to growth in distribution per unit (DPU), up from 8.30 sen in 2013 to 9.19 sen in 2017. 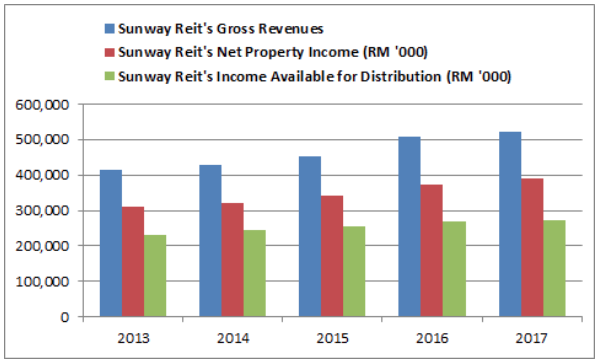 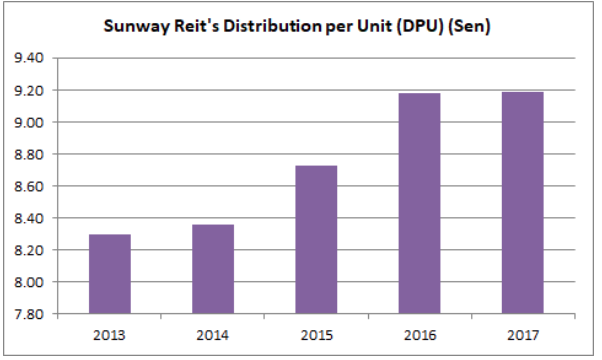 Here, I’ll provide the recent developments of Sunway Reit according to its property segments:

Sunway Bhd is the sponsor of Sunway Real Estate Investment Trust. It is a leading conglomerate with a market capitalization of RM 8.11 billion as at 22 October 2017. Please click on the link for more details.

In Q1 2018, Sunway Reit has declared 2.67 sen in distribution per unit (DPU). If Sunway Reit is able to maintain its DPU at 2.67 sen for the next 4 quarters, it would pay out 10.68 sen in DPU. As such, its gross dividend yield is expected to be 6.36%. For individual investors, it is prudent to deduct 10% withholding tax from 10.68 sen when calculating your net dividend yield, as such, I would expect net dividend yield to be 5.72%.

For further inquiries or to request for additional investment information on Sunway Reit’s Investors Relation matters, you may contact:
Email:

As at 28 July 2017, the substantial shareholders of Sunway Reit are: