Established in 1910, Sime Darby Bhd has stood the test of times and has emerged into one of the leading multinational conglomerates in Malaysia with diversified business interests across multiple industries. They include mainly oil palm plantation, property development, automotive distribution, and trading of heavy equipment in 25 different countries worldwide.

In this article, I’ll share 7 things you need to know about Sime Darby Bhd before you invest.

Over the last 6 years, Sime Darby Bhd has maintained its group revenues at RM 40 – 50 billion a year. The conglomerate has reported a decline in profits mainly from its heavy equipment division. This has caused shareholders’ earnings to drop from RM 4.15 billion in 2012 to RM 2.44 billion in 2017. 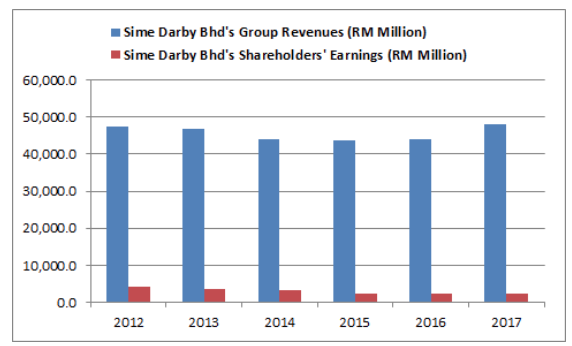 On 25 August 2017, Sime Darby Bhd has announced a proposal to undertake a major restructuring exercise on the entire group structure. It intends to list Sime Darby Properties and Sime Darby Plantations on Bursa Malaysia. Upon completion, Sime Darby Bhd would remain listed on Bursa Malaysia with its automotive distribution and heavy equipment as main business divisions. As I write, the proposal is subjected to approval and is expected to be completed by the end of 2017.

Sime Darby Bhd has identified several risks which have and will impact its financial results in the future. They include:

For further enquiries on Sime Darby Bhd’s Investors Relation matters, you may contact:

As at 13 September 2017, the substantial shareholders of Sime Darby Bhd are:

What Do You Think Of  Sime Darby Bhd As An Investment? Will You Invest In It? Share Your Views Below

To Find Out More About How To Invest In Asia, Do Check Out Our Latest Book; Value Investing In Asia.