AirAsia Bhd is truly one of the most incredible and inspiring success stories in Malaysia. Beginning with 2 aircrafts in 2001, AirAsia Bhd is currently the leading low-cost carrier in the world, serving over 110 destinations from 20 hubs in Malaysia, Thailand, Indonesia, the Philippines, and India. As I write, AirAsia Bhd is worth RM 14.0 billion in market capitalization.

In this article, I’ll list down 8 key things you need to know about AirAsia Bhd before you invest. 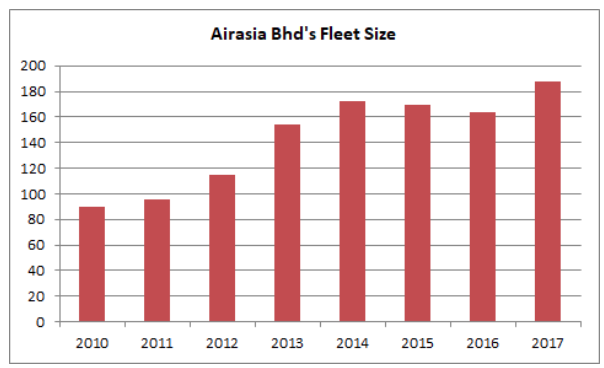 Here are the key highlights of AirAsia Bhd’s financial results since 2010:

Overall, AirAsia Bhd has achieved consistent growth in revenue over the last 6 – 7 years. This was in line with its continuous growth in passengers carried and stable average fare and ancillary income per passenger during the period. Quarterly revenue has grown from RM 870.6 million in Q1 2010 to RM 2.45 billion in Q3 2017.

AirAsia Bhd has delivered unpredictable patterns of earnings since 2010. The airline has incurred losses of RM 428.5 million and RM 405.7 million in two quarters: Q4 2014 and Q3 2015. They were the biggest losses reported during the 6 – 7 year period. In Q4 2014, AirAsia Bhd had incurred RM 647.6 million in foreign exchange loss. Meanwhile, in Q3 2015, AirAsia Bhd has incurred a total of RM 625.0 million in losses from its stake in Indonesia AirAsia.

On the positive note, AirAsia Bhd has reported RM 877.8 million in profits in Q1 2016, the largest reported over the 6 – 7 year period. This is due to having reported a RM 651.6 million in foreign exchange gain in that period. Also, AirAsia Bhd has reported RM 4.55 billion in current assets and RM 5.34 billion in current liabilities. Thus, its current ratio is 0.85. This is similar to a person having savings equivalent to 10 months’ worth of living expenses.

Here are the key highlights of AirAsia Bhd’s future prospects:

Forward Booking
From the Q3 2017 Presentation Slide, AirAsia Bhd has forecasted stable load factor of 85%, 87% and 85% for the first 3 months of 2018. The load factor is expected to be higher in February 2018 due to Chinese New Year.

From the Q3 2017 Press Release, AirAsia Bhd is planning to increase its fleet size to 500 aircrafts by 2027, up from 188 aircrafts in 2017. This works out to be an increment of 30 aircrafts on average per year for the next 10 years. The fleet expansion is intended to cater to the ongoing boom in air travel within the ASEAN region.

AirAsia Bhd is forming a joint venture partnership with SATS Ltd to set up a company known as Ground Team Red Sdn Bhd (GTR). It will take over the ground handling services for all stations in Malaysia and Singapore. AirAsia Bhd expects to reduce its aircraft turnaround costs by 16% in the first year of its operations.

From the Q3 2017 Presentation Slide, AirAsia Bhd is proposing on an internal reorganization to reflect the diversity of the group’s business operations. The proposed structure consists of 4 main segments:

AirAsia Bhd has failed to deliver sustainable profits over the last 5 years. As such, it is less meaningful to calculate its P/E Ratio. In 2016, AirAsia Bhd has declared and paid out RM 0.12 in dividends per share (DPS) to its investors. Thus, if AirAsia Bhd is able to maintain its DPS, then, its expected dividend yields is 2.86%.

For further enquiries or to request for additional investment information on AirAsia Bhd’s Investors Relation matters, you may contact:

The substantial shareholders of AirAsia Bhd with their latest shareholdings as at 20 March 2017 are as followed: