Hong Leong Bank Bhd has its origins traced back to 1905. Back then, it was originally incorporated as Kwong Lee Mortgage and Remittance Company in Kuching, Sarawak. In 1934, Kwong Lee Bank Bhd was established and has served as one of the oldest financial institutions in Malaysia.

In this article, I will cover 8 things you need to know about Hong Leong Bank Bhd before you invest:

Return on equity (ROE) is lower for 2016 and 2017. This is because, Hong Leong Bank Bhd has substantially increased its shareholders’ equity from RM 16.79 billion in 2015 to RM 21.12 billion in 2016 after it has completed its rights issue exercise in December 2015. The rights issue exercise is an effort for Hong Leong Bank Bhd to be well-capitalized to meet the requirements of Basel Ⅲ in advance. 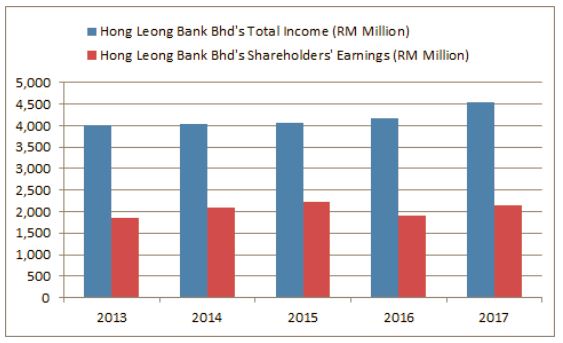 Inevitably, Hong Leong Bank Bhd faces several risks which are inherent to the banking industry such as:

As at 30 August 2017, the top 5 largest shareholders of Hong Leong Bank Bhd are:

What Do You Think Of  Hong Leong Bank Bhd As An Investment? Will You Invest In It? Share Your Views Below