Former U.S. President, Abraham Lincoln once quoted, ‘United we stand, Divided we fall.’ Today, after one and a half centuries later, these six words remain as a popular quote, commonly used to spur unity and a cooperative spirit in business and sports.

Personally, I was not sure whether Abe was known among Chinese migrants in the 1940s. But, I’m sure that the spirit of unity is universal as it transcends across regions, cultures and time. Here is a classic example. In 1946, the late Tan Sri Lau Gek Poh (LGP) founded Hap Seng Co. in Tawau, Sabah where the words ‘Hap’ and ‘Seng’ mean ‘Unity’ and ‘Success’.

Hap Seng Co. was into the timber business. Two decades later, in the 1970s, LGP was nicknamed as the ‘Timber King of Sabah’. Subsequently, LGP has ventured into new businesses in other industries, thus, giving birth to a truly diversified conglomerate known as Hap Seng Consolidated Bhd. As I write, it is worth RM 23.5 billion in market capitalization. In this article, I’ll cover 8 things that you need to know about Hap Seng Consolidated Bhd before you invest.

This is because the conglomerate has recorded multiple gains from disposal of subsidiaries during the period. These include: 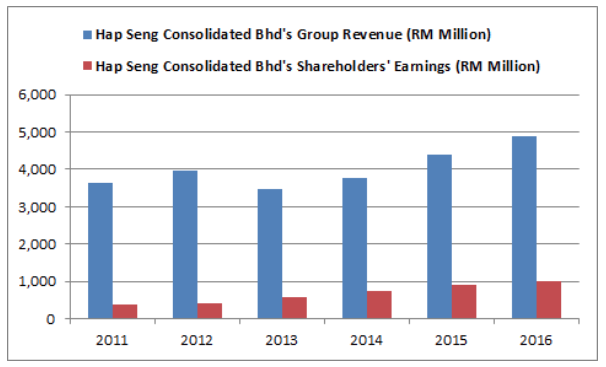 Hap Seng Consolidated Bhd has revealed its recent developments which include:

The weakening of the local property market would negatively impact demand for its property projects and its building material products. Meanwhile, Hap Seng Consolidated Bhd’s fertilizers division is exposed to foreign exchange risks as fertilizers are imported in U.S. Dollar and the cost of purchasing its products are subjected to global price fluctuations.

As I write, Hap Seng Consolidated Bhd is trading at RM 9.43 a share.

As at 31 March 2017, the substantial shareholders of Hap Seng Consolidated Bhd are: