Nanofilm Technologies International Limited (“Nanofilm”) (SGX:MZH)’s stock has tumbled over 30.0% following the release of its results for the financial half-year ended 30 June 2021 (“1H2021”). In this article, delve into the group’s latest earnings to check on its recent business performance.

In 1H2021, Nanofilm’s revenue saw an increase of 24.2% to S$96.6 million from S$77.8 million in 1H202. However, net profit after tax for 1H2021 stood at S$18.1 million, 2.3% lower as compared to S$18.5 million in 1H2020, dragged down by increased expenses related to the new Shanghai Plant 2 (utility, facility management, manpower additions and training) and equipment qualification costs, as well as new product introduction (NPI) projects, amounting to a total of S$5.4 million, which has yet to contribute materially to the group’s top line.

The group’s AMBU secured an 18.5% revenue increase in 1H2021 to S$76.0 million, compared to S$64.1 million in 1H2020. This growth was achieved in a relatively soft Computer, Communications and Consumer electronics (3C) supply chain environment. And as a result of the cost incurred for NPI projects and qualification costs for coating equipment in New Shanghai Plant 2, and changes in product mix, adjusted earnings before interest, tax, depreciation and amortisation (EBITDA) for AMBU in 1H2021 was S$28.2 million, down 4.0% year on year (YoY).

Meanwhile, the group’s NFBU slowed in 1H2021 as projects entered into the end of life with no equivalent or bigger new projects executed during this period. Revenue from NFBU has correspondingly fallen 47.8% YoY to S$1.6 million in 1H2021. Adjusted EBITDA for the NFBU stood at –S$0.9 million, down 489.7% YoY.

Lastly, revenue contribution from IEBU surged 80.8% to S$19.0 million in 1H2021, up from 1H2020’s S$10.5 million, whilst adjusted EBITDA was S$5.9 million, up 66.7% YoY. This was led by a strong project order book execution for industrial equipment in the manufacturing industries, driven by the return of capex spending this year on the back of higher product demand of the group’s customers. 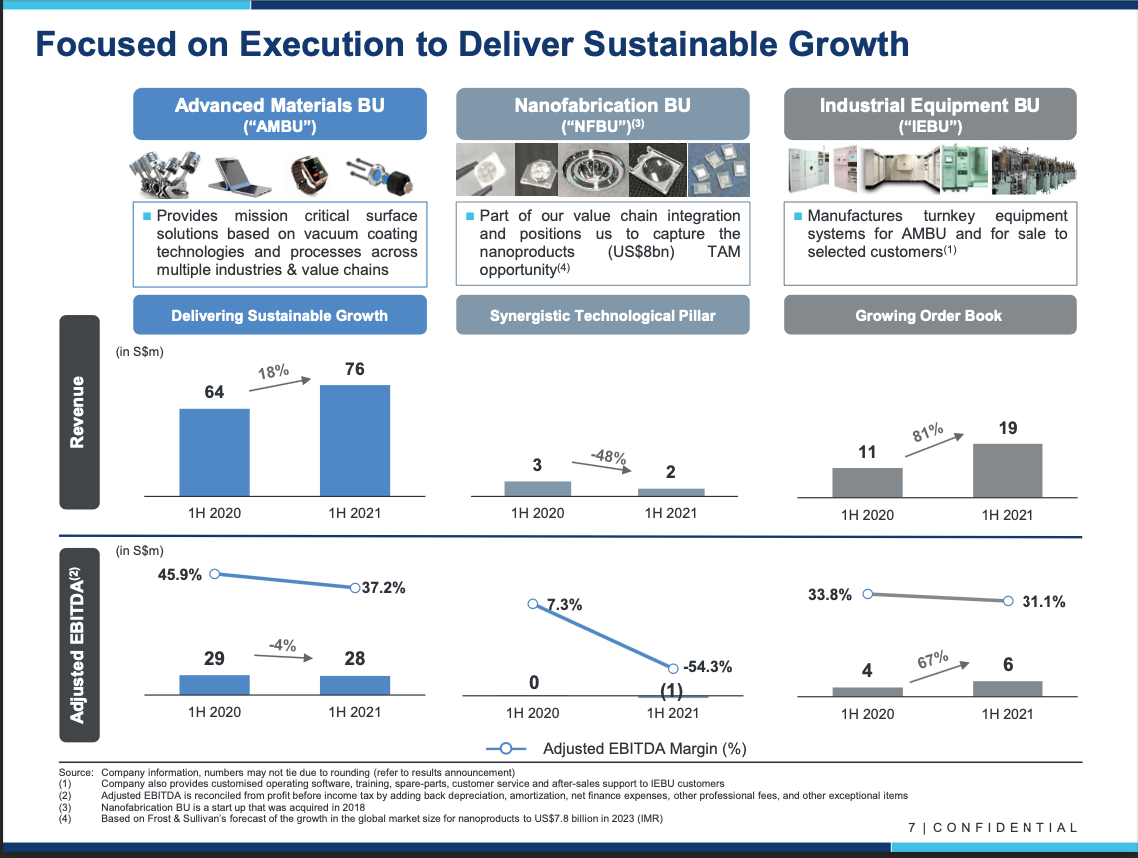 Nanofilm’s balance sheet remains strong with a net cash position of S$188.9 million, with positive operating cash flows of S$49.0 million generated in 1H2021, offset by repayment of S$40.0 million loans, of which S$14.9 million was associated with the construction of Shanghai Plant 2. This positions the group well to capitalise on opportunities to fund its business growth.

The board has declared a tax-exempt one-tier interim cash dividend of S$0.01 per share in respect of 1H2021. The interim dividend will be paid to shareholders on 8 September 2021.

Nanofilm has signed a definitive agreement with Temasek to form a joint venture (JV), Sydrogen Energy, to create products to be used in the growing hydrogen economy.

Under the terms of the JV, Nanofilm will take a 65.0% stake in the company, with Temasek holding the remainder.

The total initial investment in Sydrogen is around $140.0 million, of which Nanofilm will chip in $21.0 million, as well as the transfer of its hydrogen energy business and license of its intellectual property relating to the business.

The proceeds are intended to be used for research and development and the construction of production capacity.

According to an article in The Edge, Sydrogen’s first focus area will be the application of Nanofilm’s proprietary filtered cathodic vacuum arc technology in the development of protective carbon coatings for metallic bipolar plates of fuel cells and electrolysers.

This carbon coating is similar to conductive diamond, with special material properties such as corrosion resistance, low resistivity, ion-leaching prevention, and high conductivity, which is critical to manufacturing cost-effective metallic bipolar plates.

Nanofilm shared that to better align the its corporate objectives, the group undertook a reorganisation of its reporting structure under which a BU head is appointed to directly oversee each division of the company. Following the reorganisation, and a period of sabbatical leave due to personal reasons, its chief operating officer (COO) Mr. Ricky Tan decided to pursue other opportunities outside the group.

Investors may be unnerved by Mr. Tan’s resignation as it comes less than two months after the group announced that its chief executive and executive Director, Lee Liang Huang, was stepping down due to health reasons. Since then, Nanofilm founder and executive chairman Shi Xu has assumed the role of interim chief executive.

Despite the disappointing performance, management remains optimistic about the groups’ prospects and believes its operational infrastructure has put it in a good position as it enters into a typical high activity season in 2H2021. In addition to the 3C NPI projects, the group is building its business pipeline with strategic projects in existing and new markets aimed to take shape in 2H2021 and beyond. 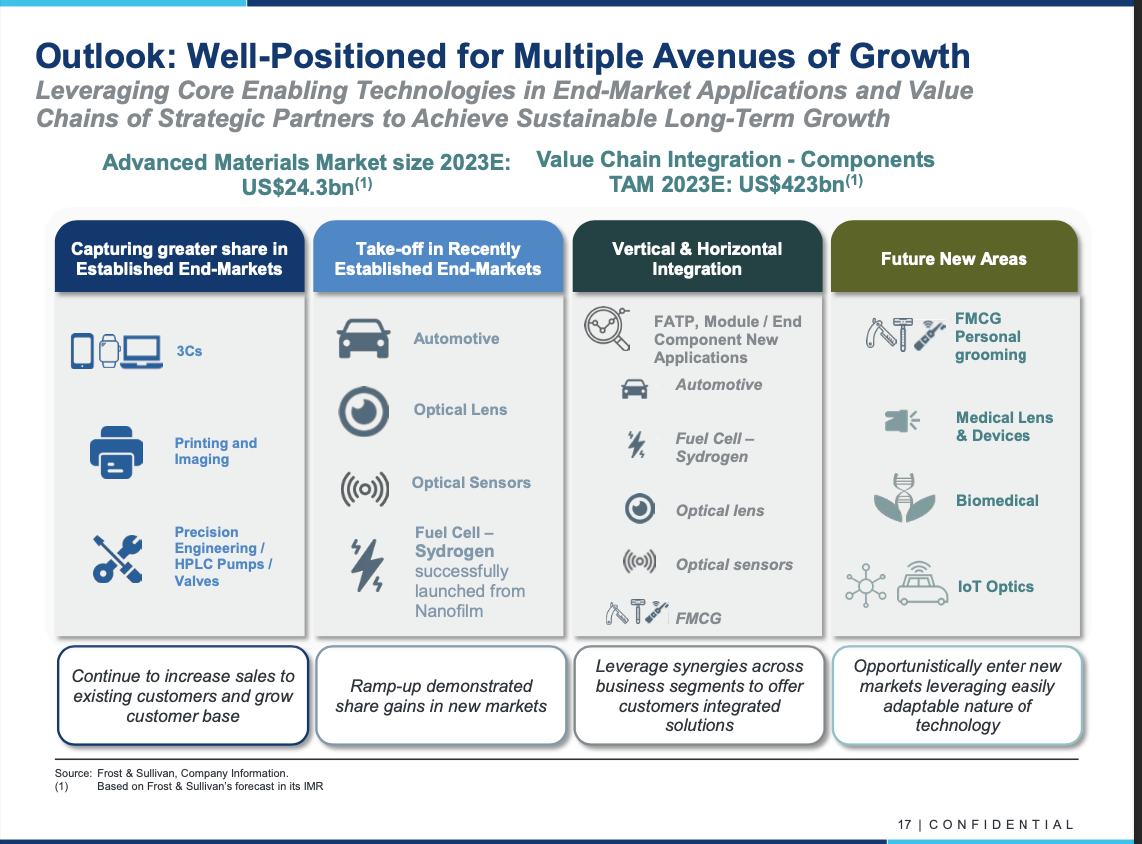