PACC Offshore Services Holdings Ltd (SGX:U6C) aka POSH was listed in May 2014. What’s interesting was what happened since then. Since Jul 2014, crude oil had been going on a freefall tumbling from over US$100 per barrel to the sub-US$50 per barrel region. 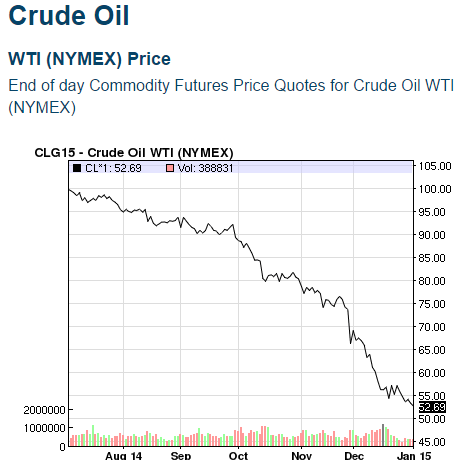 As mentioned in our earlier article, this plunge in oil prices was affecting oil & gas players throughout the entire value chain and POSH wasn’t spared as well.

How much was POSH affected?

Since their IPO at S$1.15 per share in May 2014, given current price (Jan 9, 2015) of S$0.54, an investor at IPO would have been licking their wounds. And all this action was just within six months since their listing.

Even after close to a 50% drop since its IPO, POSH definitely wasn’t too small of a player at all with close to a market capitalization of S$1 billion! There are many reasons on why stock prices can plummet, but one direct correlation that we can see from above would be how POSH, indirectly involved in the upstream exploration & production (E&P) of the oil industry was badly hit. Normally the E&P is termed as the high risk high reward sector and would get hit first. And next down the line would then be the supporting industries and POSH was in one of these supporting roles.

One recent reason contributing towards their decline might have been the slowdown in the US oil rigs, with the most number of idle rigs reported since 1991. Even though the rigs in that article mostly referred to US land-based rigs, with offshore players generally assumed to have a higher cost, this would also have led to the perception that overall demand in the upstream was slowing. And for the support industry, if your customers are seen to be in trouble, you would most definitely be affected as well!

So What Does POSH Do?

Broadly POSH operated in the offshore support industry. To illustrate what POSH does, let’s imagine you are an oil driller. What do you need to do to operate?

You can’t just magically buy an oil rig and press a magic button and “ta-dah” oil just appears (We would all like that).

Some things that you need include:

And this is where POSH comes in. With their combined fleet size of 112 vessels (As at IPO date, this made them the largest Asia-based international operator of offshore support vessels and top five globally), they were there to fill up this void in the industry!

How Do They Make Money?

Whenever we invest in any company, one of the first thing we HAVE to ask would be “How does this company make money?”

And for POSH’s case, how they make money is from the usage of their vessels. It simply meant that they were in the business of “renting” their fleet of ships out over a certain contracted period to their customers.

So far we have talked about the industry POSH operates in as well as how they make money. In our second part, we will dive into POSH’s top FOUR operating segments and their competitive strengths!