Xiaomi Corporation made history by being the largest IPO on the Hong Kong Exchange this year. However, the IPO is matched with tons of bad media coverage, resulting in a very pessimistic view of the company. Here are five things you might want to know about Xiaomi Corporation Ltd before you invest.

According to the company, Xiaomi sees itself as a software company. The company started out with selling high-quality smartphones at an affordable price. It wanted to bring electronic devices down for its consumers. One of the ways it is doing it is by selling direct to consumers, through its e-commerce channels and its offline stores.

Typical smartphone brands still sell through the telecommunication providers, thus that is a different business model in the industry. Once the customers got their smartphones or other devices, it will introduce them to Xiaomi Corp’s applications such as its App Store, browser, Music & Video Apps. Xiaomi then hopes that these users will start spending more money on these internet services.

In FY2017, it has a huge loss of RMB 43.89 billion, mainly coming from an accounting loss due to its fair value change in its convertible redeemable preferred shares, aka its previous investors. According to the company, these losses will no longer appear once the company is listed as all previous investors would be converted into ordinary shareholders.

At this moment, Xiaomi still obtained about 70% of revenue (FY2017) from its smartphone sales. Another 20.5% came from other IoT products and 8.6% came from its internet services. So many investors are mocking Xiaomi for calling themselves an internet company when only 8.6% of its revenue is coming from internet services, albeit that is still about RMB 10 billion in FY2017. 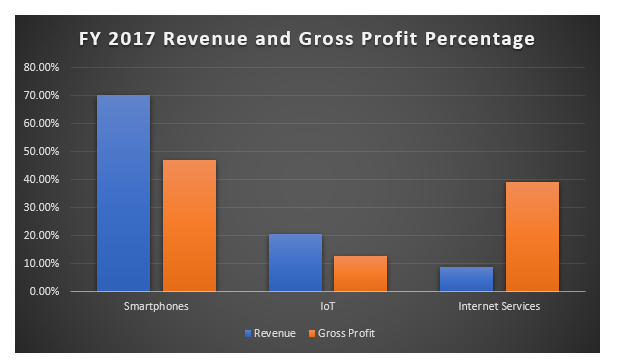 Xiaomi is also not giving out a dividend at this point.

Xiaomi has shown that its business is able to grow in China. It is now taking its success in China to other parts of the world. It is now one of the top smartphone brand in India, given its high quality, low price points for its products. Xiaomi has recently announced it is enter Bangladesh as well. On top of that, it has an active online fan based where the company is able to spot where are the strong demands coming from. Countries like Spain, Russia and Poland are all relatively strong future markets for Xiaomi to expand more into.

Secondly, Xiaomi is also expanding horizontally through its product range. The company can be seen as a true Internet-of-Thing (IoT) company. It has a wide range of IoT products like CCTV, electric bike and even a rice cooker.

The idea for Xiaomi is to be a leading brand in the home of the future where everything is connected to one another.

The innovation speed of Xiaomi is extremely fast and that could push it to be one of the key IoT company in the future.

Xiaomi Corporationis now worth about USD50 billion in the market, making it one of the largest companies in Hong Kong Exchange. It is such a large company that it has been selected to be part of the Hang Seng Index constituent. Because of that news, the share price has since rallied from its IPO Price of HK$17.00 to the current HK$20.00. However, the company continues to be unprofitable and trading at a relatively high forecasted P/E ratio.