Price to Book (PB) Value measures the difference between current share price and the book value per share. Book value, as the name suggests, refers to the amount of assets carried on a company’s accounting book, after deducting all its liabilities. This is also known as the Net Asset Value (NAV).

By dividing the book value or NAV by the total number of shares, we will get the NAV per share. Comparing the share price against NAV per share gives an indication of how cheap or expensive the share is vis-à-vis the amount of net assets embedded in each share.

The formula of Price/Book Value

All things equal, between two shares, an investor would pick the company with lower PB since it is deemed cheaper, and there is a greater chance that market, being efficient in the long run, would close this valuation gap and push the share price up to match its NAV.

Dividends are another key return metric to consider, as it represents cold hard cash disbursed by the company into shareholders’ pocket. Dividend returns are less volatile as companies do not change their dividends daily, unlike share price which represents capital returns, that can show a wild swing in a short span of time.

So I thought it would be interesting to identify the STI component stocks with the lowest PB ratio and with a satisfactory dividend yield of above 3.5%.

Here are the 4 companies I found and a quick brief on them.

Hutchison Port Holdings Trust (HPHT) is a business trust that owns deep-water container terminals in the Pearl River Delta including Hong Kong International Terminals and Yantian International Container Terminals in Shenzhen. In total, it has a total of 36 berths that handled the total throughput of 24.3 million twenty-foot equivalent containers in 2017. 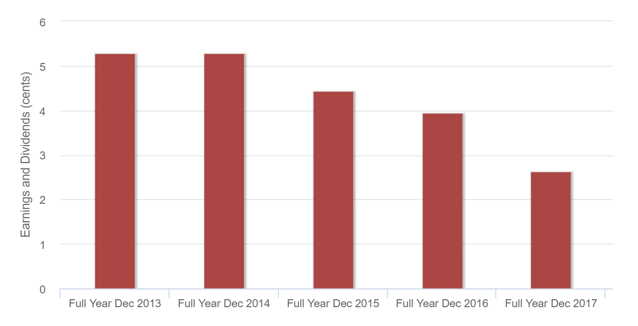 While it spots a juicy distribution yield of 8.7%, HPHT’s Distribution per Unit in the past 5 years has been decreasing. As seen from the diagram, its distribution was slightly more than 5 cents in 2013, which has since dropped to 2.63 cents in 2017.

CapitaLand Limited is one of Asia’s largest real estate company, with operations covering the full spectrum of real estate development activities ranging from building, developing, operating and funds management of residential, retail and commercial properties. As of 31 Mar 18, it has Assets Under Management (AUM) of S$91 billion. Yangzijiang Shipbuilding (YZJ) is the largest non-state-owned ship-building company in China that produces a broad range of ships and vessels such as containership, bulk carriers, Liquified Natural Gas vessels and Very Large Ore Carriers, with 5 shipyards located along the Yangtze River.

It has a shipping arm that owns a fleet of 13 bulk carriers leased out to generate charter revenue. It also operates other shipping related services such as ship design services and ship demolition.

YZJ annual dividends have been relatively stagnant over 5 years. For full-year 2017, its dividends per share were 4.5 cents.

I guess I do not need to share too much about Singapore Airlines (SIA). It is one of the most well-known Singapore brands and has won numerous best airline awards. SIA dished out dividends that ranged from 21 cents to 45 cents per share in the past 5 years. Take note that in 2014, there was a one-off special dividend of 25 cents that boosted the dividends to 46 cents that year.

A company with the low valuation or high dividend yield does not necessarily mean it is a bargain stock. It is important to look into other factors such as the quality of the business and management as well. However, for investors looking for deep undervalued stock, this might be a good starting point for you.