Axis REIT was listed on Bursa Malaysia on 3 August 2005 as Malaysia’s first business space and industrial REIT. Subsequently, on 11 December 2008, the REIT was reclassified into an Islamic REIT. As at 15 February 2018, the REIT is worth RM 1.69 billion in market capitalization. Here, I’ll list down 10 quick things you need to know about Axis REIT before you invest.

For a start, an Islamic REIT is one where its rental income derived from non permissive activities must not exceed the 20% benchmark set by the Syariah Advisory Council of the Securities Commission of Malaysia. These activities include the provision of financial & insurance services, gaming, hotels & resorts, and manufacturing of non-halal products. This reclassification enables Axis REIT to widen its investor base to include local Syariah funds.

In 2016, Axis REIT has reported that only 2.5% of its income was generated from non permissive activities, thus, fulfilling the benchmark set above. 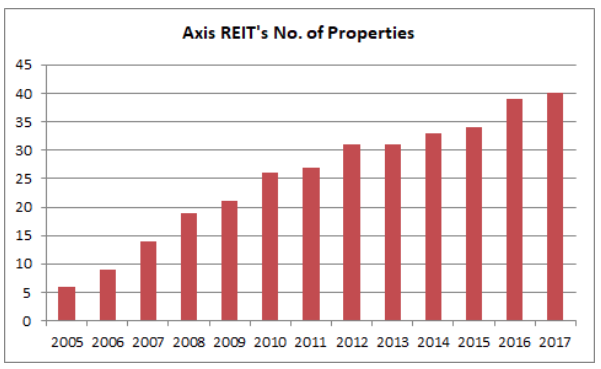 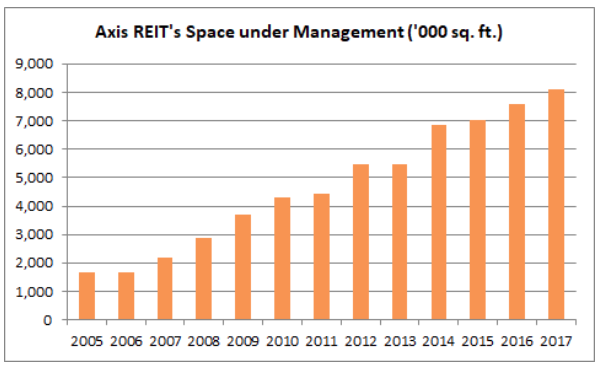 As a result, Axis REIT has achieved growth in revenue, net property income, and realized earnings:

In 2014, Axis REIT has implemented a 2 for 1 unit split. Hence, I’ve adjusted its distributions per unit (DPU) based on its enlarged number of units. I have discovered that Axis REIT has maintained its DPU at 8.0 – 10.0 sen since the year 2010. 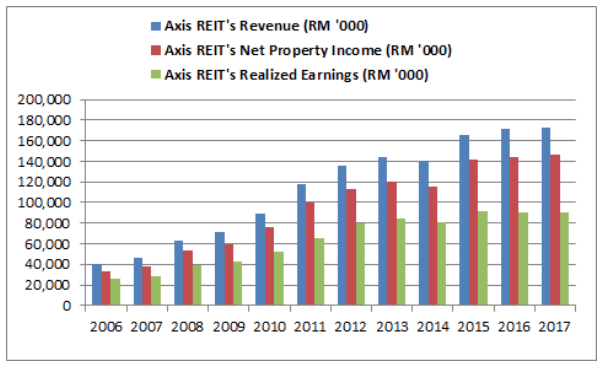 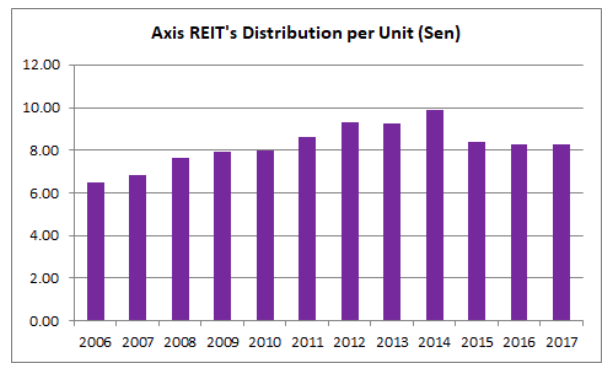 As at 31 December 2017, Axis REIT has achieved an occupancy rate of 91.1% for its overall portfolio. It has reported a weighted average lease expiry period of 5.87 years. From its portfolio of 40 properties,

Axis REIT has completed two development projects. They are:

In addition, it has several ongoing property acquisitions:

Axis REIT adopts a distribution policy to declare and pays out at least 90% of its distributable income on a quarterly basis. Over the last 12 months, Axis REIT has paid out 8.26 sen in DPU.

If Axis REIT is able to maintain its DPU at 8.26 sen for the next 12 months, its gross dividend yield is expected to be 6.03%. For individual investors, it is prudent to deduct 10% withholding tax from 7.43 sen when calculating your net dividend yield, as such, I would expect net dividend yield to be 5.43%.

For further enquiries or to request for additional investment information on Axis REIT’s Investors Relation matters, you may contact:

The substantial shareholders of Axis REIT with their latest shareholdings as at 31 December 2017 are as followed: