Pop Mart International Group Limited (“Pop Mart”) (HKG:9992) is the largest and fastest-growing pop toy company in China. Shares of the Chinese toymaker more than doubled on its trading debut on the Hong Kong stock exchange on 11 December 2020 marking another eye-catching initial public offering (IPO).  If you are looking at Pop Mart with interest, here are 10 things to know before you invest.

According to a Frost & Sullivan survey, more than 95% of pop toy consumers are between the ages of 15 and 40, 63% of whom hold bachelor degrees or above. Amid the fast-evolving Chinese society, the young generation has much more exposure to diverse cultures, modern lifestyles and rich information. They have shown a strong desire for self-expression and individuality, and are willing to channel their spending power towards emotional satisfaction. Pop toy fans are also enthusiastic to share their feelings and preference through social media, as part of the communities of people with the same interests.

Pop Mart is the largest pop toy brand in China in terms of retail value in 2019 with a market share of 8.5%, and has experienced rapid growth with a CAGR of 226.3% from 2017 to 2019, outpacing all other major players. Among the top players in China’s pop toy industry, Pop Mart is the only one with an integrated platform covering the industry chain, including intellectual property (IP) operation, original equipment manufacturer (OEM) production, consumer access and pop toy culture promotion.

Proprietary IPs. Pop Mart’s proprietary IPs include (i) iconic IPs acquired by the company such as Molly and Dimoo, which evolve when the original artists continue to refine them and create new editions, and (ii) IPs developed by its in-house design teams, such as Yuki and BOBO&COCO. In July 2018, Pop Mart acquired ownership of the intellectual property rights of Molly in China, and later in April 2019, the company entered into an agreement to acquire ownership of the IP rights of Molly in the rest of the world. For proprietary IPs, the company enjoys full intellectual property rights, including the rights to develop and sell pop toys and license out for additional monetization opportunities.

In 2019, revenue generated from Pop Mart brand products based on proprietary IPs amounted to RMB627.0 million or 37.2% of total company revenue. Molly is critical to Pop Mart’s sales performance as it accounted for 27.1% of the company’s 2019 total revenue. If Molly erodes or fails to maintain its current appeal to consumers, there is no guarantee that the company could develop or identify comparable IPs as replacement.

Exclusive Licensed IPs. Pop Mart’s exclusive licensed IPs, such as PUCKY, The Monsters and SATYR RORY are created by artists the company cooperates with. Pop Mart enters into license agreement with selective artists for exclusive rights to develop and sell pop toy products based on such IPs in China, and other specified regions. For most of its exclusive licensed IPs, the company may also sub-license them in specified areas for additional monetization opportunities.

In 2019, revenue generated from Pop Mart brand products based on exclusive licensed IPs amounted to RMB597.4 million or 35.4% of total company revenue.

Pop Mart develops a broad array of original, unique and entertaining pop toy products based on its IPs, and its artistic and collectable products are able to attract grown-ups as well as young generations. The company’s Pop Mart brand products are primarily categorized into blind boxes, action figures, ball-jointed dolls (BJDs) and accessories.

The following table sets forth images of the principal categories of Pop Mart brand products:

Pop Mart operates a omni-channel sales network and marketing initiatives to accommodate consumer needs. The following charts illustrate the company’s revenue contribution by each of its sales channels as a percentage of total revenue for the periods indicated:

As of 30 June 2020, the company had 136 retail stores in 33 cities in China, primarily located at major commercial districts in first-tier and second-tier cities. Retail stores are its primary sales channel which provides the widest selection of products to cater to different customers. Moreover, retail stores are also an important channel for the company to establish a brand image and build connection with fans.

Pop Mart’s fast-growing online channels include Tmall flagship store, Pop Draw, Paqu and other mainstream e-commerce platforms in China. In 2019, revenue generated from its Tmall flagship store, amounted to RMB251.5 million and ranked first among all flagship stores of toy brands on Tmall in terms of retail value in 2019, according to Frost & Sullivan. Meanwhile, Pop Mart’s most passionate fans are gathered on Paqu, the company’s online community which features pop toy culture information and updates, e-commerce and social interaction.

Pop Mart intends to use the net proceeds raised of HK$4.6 billion for the following purpose:

Pop Mart’s largest shareholders after the IPO are co-founder Mr. Wang Ning (王宁) and his spouse, Ms. Yang Tao (杨涛), with an equity stake of 49.8%.

Mr. Wang Ning, aged 33, is the company’s executive director, Chairman of the Board and Chief Executive Officer. He founded Pop Mart in October 2010 shortly after graduating from university, and is responsible for the overall strategic planning and management of the company. Mr. Wang received his bachelor’s degree in advertising from Sias International College of Zhengzhou University in the PRC in June 2009, and his master’s degree in business administration from Guanghua School of Management of Peking University in the PRC in June 2017.

Meanwhile, Ms. Yang Tao, aged 33, is the company’s executive director and vice president. Ms. Yang joined Pop Mart in October 2010 towards the end of her master’s degree program, and is responsible for overseeing the product development of the company. Ms. Yang received her bachelor of general study degree from Fort Hays State University in the United States in May 2009, and her master’s degree in communication studies from Hong Kong Baptist University in Hong Kong in November 2010.

Pop Mart is a fast-growing and profitable company. There is much to like about its financials.

With a closing share price of HK$81.35 as at 31 December 2020, Pop Mart is trading at a price to earnings (PE) ratio of 197.7, with a market capitalisation close to HK$114.1 billion. The company has a simple to understand business and is interesting given its growth prospects, but looks pricey at the current valuation. Since it is a new listing, investors should monitor the performance of the company for a while post listing before considering an investment. 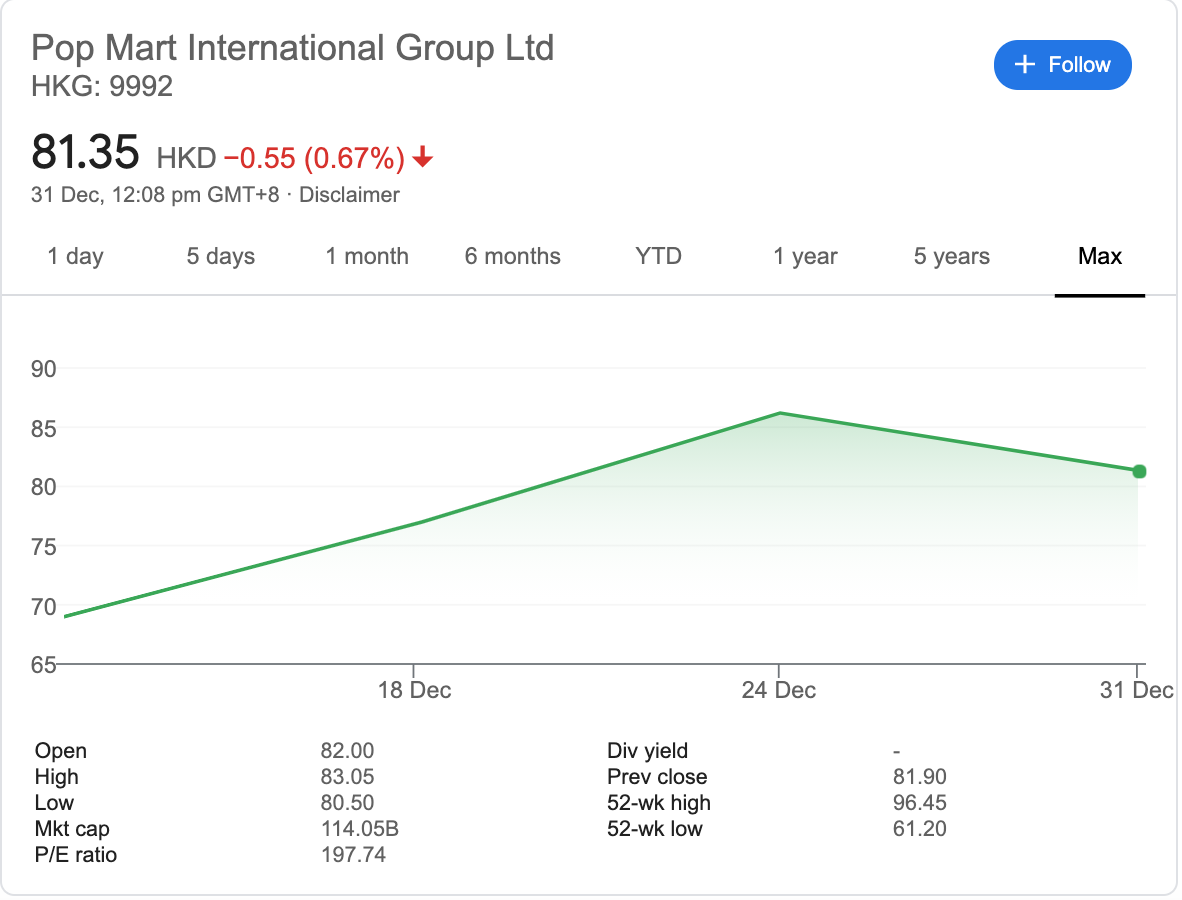