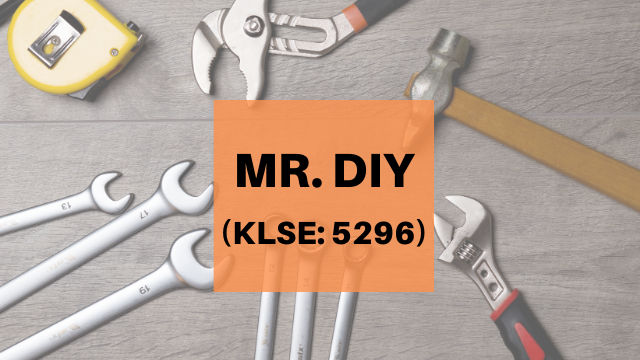 Mr DIY made a stellar debut on the Main Market of Bursa Malaysia on 26 October 2020, its shares climbed as much as 9.4% on its first trading day. The company’s initial public offering (IPO) is the largest listing on the Malaysian exchange this year and raised nearly RM1.5 billion from both institutional and retail investors. If you are looking at Mr DIY with interest, here are 10 things to know before you invest.

Mr DIY is the clear market leader in Malaysia’s home improvement retail sector with an estimated 29.1% market share by revenue in 2019. Its store count of 640 stores as at 6 September 2020, easily outstrips its closest competitor, One Stop Superstore Sdn Bhd’s 83 stores. As one of the pioneer home improvement chain retailers in Malaysia, Mr DIY also has the widest array of product categories in the country.

2.  Comparison with other public listed peers

Mr DIY seems to come out tops among selected public-listed ASEAN retailers with business interests in the home improvement sector. Not only has the company experienced the highest revenue growth, but it also has the highest net profit margin among its peers in 2019.

3. The listed entity only comprises Mr DIY’s operations in Malaysia and Brunei

Investors eyeing overseas expansion opportunities for Mr DIY will be disappointed to know that the listed entity only encompasses operations in Malaysia and Brunei. Instead, other regional stores are operated through separate entities owned by the company’s major shareholders. Nevertheless, Frost & Sullivan estimates the home improvement retail sector in Malaysia to grow at a compounded annual growth rate (CAGR) of 10.2% between 2019 and 2024. Hence, there is still ample room for Mr DIY to grow in Malaysia for the next few years.

Mr DIY launched its dedicated e-commerce website, www.mrdiy.com.my, in June 2018. Orders placed through the website are fulfilled through third-party delivery service providers. In addition, customers may choose to have their purchases delivered for “store-pickup” within 2 to 5 working days in 84 stores in the Klang Valley, Johor, Perak and Penang. Mr DIY intends to expand the “store-pickup” service to other regions in Malaysia as online sales to residents in such regions increase.

Nevertheless, as sales from Mr DIY’s e-commerce website and third-party e-commerce retail platforms only accounted for 0.3% and 1.6% of the company’s total sales revenue for the financial year ended 31 December 2019 and the financial period ended 30 June 2020 respectively, there is much room for the company to grow its e-commerce channels.

5. How the IPO proceeds are used

The urgent need for the company to pare down its borrowings is not surprising since total borrowings has ballooned from approximately RM92.0 million (net gearing ratio of 0.05x) for the financial year ended 31 December 2018 to approximately RM608.9 million for the financial period ended 30 June 2020 (net gearing ratio of 0.74x).

The table below summarises the estimated aggregate cost of opening new stores for the periods indicated. The company has indicated that the expansions will be funded through internally generated funds and bank borrowings. The company has a target payback of 2 years on new stores.

SSSG is a measure of the growth in revenue generated by stores during a period compared to revenue generated by those same stores for the same duration in the immediately preceding year. This metric tracks the performance of each store and helps retailers ensure the opening of new outlets do not impact or cannibalize sales of existing outlets. Unfortunately, the company has reported a year-on-year decline in SSSG from 2017 to 2019 as it grew its store network which is a worrying sign.

8. Significant dividend distributions prior to IPO

Mr DIY has a target dividend payout ratio of 40% of its net profit attributable to shareholders which can be viewed as generous. However, since Mr DIY is in an expansion mode, we expect that most of the cash generated from its operations will be channelled back to grow its retail footprint. Investors should note that the company had rewarded its controlling shareholders with handsome dividends amounting to approximately RM133.0 million and RM501.7 million in 2018 and 2019 respectively, prior to the listing exercise.

Creador Funds, through Hyptis Limited, is the second-largest shareholder in the company with an equity stake of 15.2% upon listing. Ong Chu Jin Adrian who is the Managing Director of Creador also serves as Mr DIY’s Non-Independent Executive Director and Chief Executive Officer. Together with Tan Yu Yeh, both men are jointly responsible for the company’s day-to-day operations with specific responsibilities in corporate management and affairs as well as financial oversight. Separately, Brahmal A/L Vasudevan, the founder and Chief Executive Officer of Creador also serves on the board of Mr DIY as a Non-Independent Non-Executive Director.

10. Future growth is priced into its current valuation

With a closing share price of RM1.78 as at 4 November 2020, Mr DIY is trading at a price to earnings (PE) ratio of 38.9, with a market capitalisation close to RM11.2 billion. Historically, the company has achieved revenue growth of 36.1% and net profit growth of 23.0% from 2017 to 2019 (and these results were before the Covid-19 outbreak). Hence, investors need to be aware that plenty of growth has been priced into the company’s current share price, leaving very little margin for error. Now it is up to management to execute its business plans and deliver on its commitments.