In this article, I’ll list down 10 quick facts that you need to know about OUE C-REIT before you invest.

Since its listing, OUE C-REIT has recorded growth in gross revenue, net property income, and distributable income. Distributions per unit (DPU) has grown from 3.63 cents in 2014 to 5.18 cents in 2016. 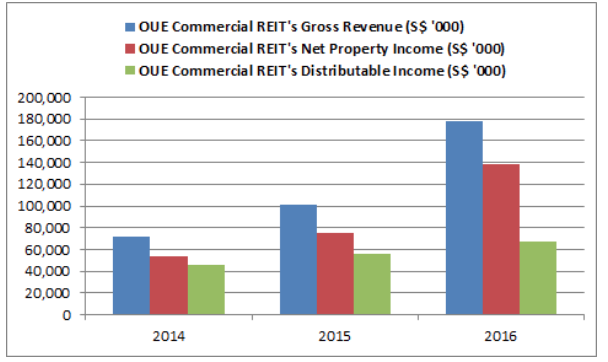 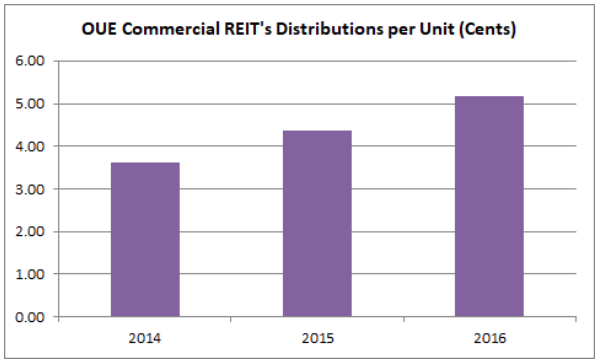 There is no major acquisition or disposal announced by OUE C-REIT.

OUE Ltd is the sponsor of OUE C-REIT. OUE Ltd is a diversified real estate development and investment corporation with a real estate portfolio located in prime locations in Asia and the United States. It is an SGX-listed entity that is worth S$ 1.68 billion in market capitalization.

OUE Ltd has granted OUE C-REIT a right of first refusal (ROFR) over three properties. They include OUE Downtown 2 and Downtown Gallery located at Shenton Way in Singapore and the U.S. Bank Tower at Los Angeles in the United States. Thus, OUE C-REIT has the potential to increase its portfolio to 476,556 sq. m., up from 224,923 sq. m. in 2016.

As at 30 September 2017, OUE C-REIT has recorded 97.0% in committed occupancy rate for its portfolio. 47.9% of its leases would expire starting in the financial year 2020 and beyond. 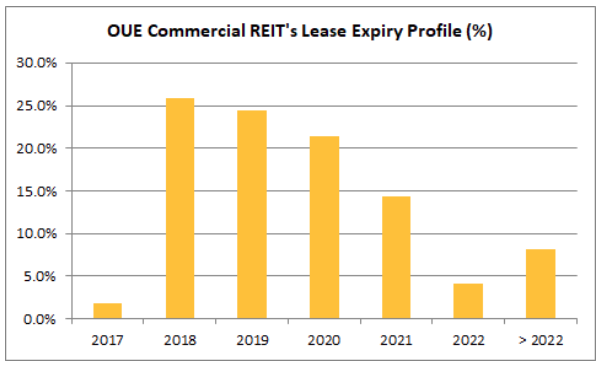 OUE C-REIT adopts a distribution policy to declare and pays out at least 90% of its distributable income on a quarterly basis. Over the last 2 quarters, OUE C-REIT has paid out 1.15 cents in DPU.

In September 2017, OUE C-REIT has made its maiden issuance of 3.03% fixed rate notes maturing in 2020 amounting to S$ 150 million. This has increased OUE C-REIT’s proportion of fixed-rate debt to 91.8% and has extended its debt maturity profile. As such, it has improved OUE C-REIT’s financial flexibility.

In October 2017, OUE C-REIT has announced its proposal to redeem S$ 75 million worth of convertible perpetual preferred units (CPPUs) as part of its plan to optimize its capital structure over the long-term. The redemption was effective on 2 November 2017 and was funded by a combination of existing credit facilities and cash flows from its operations. Thus, OUE C-REITs was able to mitigate dilution in Distributions per Unit (DPU) from potential conversion of CPPUs into new units in the future.

For further enquiries or to request for additional investment information on OUE C-REIT’s Investors Relation matters, you may contact: