ESR-REIT, formerly known as Cambridge Industrial Trust, was listed on the SGX on 25 July 2006. It invests in a portfolio of industrial properties located in Singapore. The year 2017 has been pivotal for ESR-REIT as the board has taken proactive measures to expand regionally. Here, I’ll bring a detailed account of its past achievements and pen down its recent developments that are material to its future. Therefore, these are the 10 things you need to know about ESR-REIT before you invest. 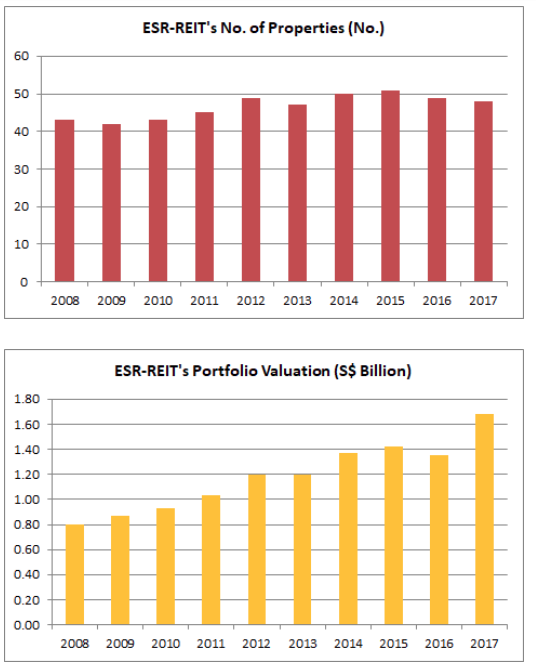 I’ve also compiled the financial results of ESR-REIT over the last 10 years. It has reported:

The decline in revenue, NPI, and DI from 2015 to 2017 is due to divestments made on several non-core properties and higher operating expenses incurred as ESR-REIT converts a portion of its assets from single-tenancy to one that is of multi-tenancy during the period. As at 31 December 2017, ESR-REIT has recorded a 93.0% in occupancy rate for its portfolio, deriving income from 207 tenants. Moving forward, 60% of ESR-REIT’s leases would begin to expire from the financial year 2020 onwards. e-Shang Redwood (ESR) is Asia’s leading logistics real estate developer and investor with presences in China, India, Japan, Korea and Singapore and has assets under management (AUM) in excess of US$ 10 billion as 31 December 2017. As at 28 February 2018, ESR owns 12.4% shareholdings of ESR-REIT.

ESR-REIT has restructured its portfolio by divesting its non-core properties, channeling its capital to acquire new investment properties. Details include:

On 28 January 2018, ESR-REIT has issued a proposal to merge with VIT to establish:

Presently, the managers of both ESR-REIT and VIT are in discussions on the merger. Both parties would make the necessary announcements on it should there be material developments on the merger in the near future.

ESR-REIT adopts a distribution policy to declare and pays out at least 90% of its distributable income on a quarterly basis. The trust has declared and paid 3.853 cents in DPU for 2017. If ESR-REIT is able to maintain its DPU at 3.853 cents, its expected gross dividend yield is 6.7%.

For further enquiries or to request for additional investment information on ESR-REIT’s Investors Relation matters, you may contact: